Transport design studio PriestmanGoode has developed a concept for a high-performance balloon and pressurised capsule for Space Perspective to take space tourists on a "cruise" around the stratosphere.

Designed for American space tourism startup Space Perspective, the two-part spaceship is comprised of a four-metre-tall and five-metre-wide pressurised pod shaped like a spinning top, which is attached to a giant high-altitude balloon.

The Neptune craft will take up to eight "explorers" and a suite of research payloads on a six-hour journey to the upper edge of earth's atmosphere.

"The design of the capsule is a critical component of providing our explorers the inspirational experience that astronauts describe of seeing our Earth in space," added co-founder Jane Poynter.

The journey would see a pilot launch from the Shuttle Landing Facility at NASA's Kennedy Space Center in Florida, to fly passengers on a two-hour ascent above 99 per cent of the earth's atmosphere to 100,000 feet (around 30,000 metres).

Here it will "cruise" above the earth for up to two hours, to enable voyagers to take in the view and record the experience.

The craft will then embark on a two-hour descent under the balloon before landing in the Atlantic ocean, where a ship will collect the passengers, the capsule and the balloon and transport them back to land.

In 2013, Space Perspective's two founders were involved in a similar initiative to take passengers to the edge of space in a balloon-like vessel, also designed by PriestmanGoode. 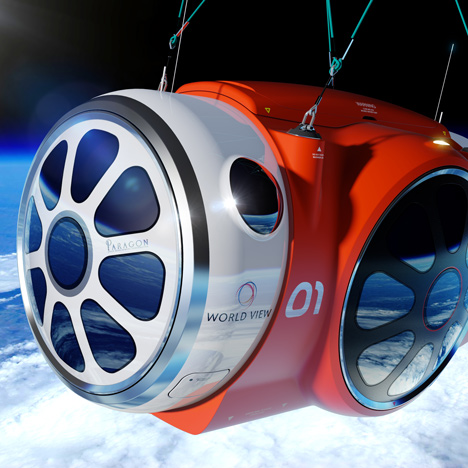 Journey to Space capsule for space tourists by Priestmangoode

Although these journeys didn't happen, the company has scheduled Neptune's first test flight to take place in early 2021, without any passengers, but with a group of research payloads onboard.

The Neptune spaceship has been designed "from the inside out", with passenger experience at the forefront of the design, said PriestmanGoode co-founder Nigel Goode.

"[Neptune] is the culmination of a long-term collaboration that has resulted in the only spaceship that is designed with the human experience at its core and will pave the way for the future of commercial space travel," he said.

"Our starting point was the passenger experience," he continued. "We looked at all the different elements that would make the experience not just memorable, but truly comfortable as well and included essentials for a journey of six hours, like a lavatory."

According to Goode, the design team wanted to ensure that travellers had access to unobstructed, 360-degree views, as well as having an efficient space that they could move around during the journey.

"We needed to minimise weight and create a highly functional environment for the pilot," Goode added. "All these elements guided the shape of the final capsule." 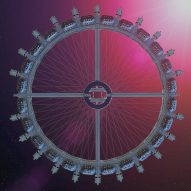 Space Perspective is just one of many initiatives hoping to send members of the public into space. The Gateway Foundation is designing the world's first commercial space hotel in a bid to make space accessible to everyone.

Called the Von Braun Space Station, the hotel will consist of a 190-metre-diameter wheel that will rotate to create a gravitational force similar to that felt on the moon.