Marjan van Aubel has designed a set of stained glass-style solar panels that will form part of the Dutch pavilion at Expo 2020 Dubai.

Made from polyethylene terephthalate, or PET, these lightweight plastic modules can simultaneously generate solar power and let tinted daylight pass through.

"They're beautiful and relevant," Marjan van Aubel said in her live interview with Dezeen CEO Marcus Fairs for VDF. "It will really change perspectives".

Attractive sustainable technology is the way to effect change, insists Van Aubel. "We're not going to change the world with ugly things," she told Dezeen

The solar designer teased the "secret project" she was working on in her video chat on 20 May. This week it was revealed that her cutting-edge and colourful panels will be a key part of the Dutch Biotope pavilion.

Most of the pavilion's roof will be made up of these coloured photovoltaic cells, which will have a moiré-effect pattern running through them.

The Dutch Biotope will be a showcase of sustainable design and technology. Acting as a self-sustaining microclimate, a tower of plants will dominate the space. The pavilion, which will be located in the expo's sustainability district, will be made from natural materials that will all be recycled or reused after the event. 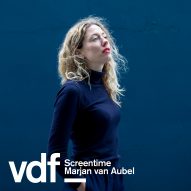 Van Aubel has been developing the solar panels for several years. they are created using light-absorbing organic dyes that cover tiny particles of titanium dioxide nanomaterial to turn sunlight into electricity. The low-cost, flexible solar cells are applied to a translucent surface like a sticker.

The expo will be a chance to show off the potential of this technology to some of the 25 million visitors projected to attend the event, which has been moved to 2021 due to the coronavirus pandemic.

After the expo, the roof will be disassembled and the modules repurposed for other projects.

"Especially with solar panels, we have to think about circularity," Van Aubel told Dezeen. "Because their lifespan is 40 years, maybe 50 years, and then there's no way to recycle them."

Van Aubel has previously showcased her work with a stained-glass window that can charge a mobile phone and a desk that can also charge appliances. 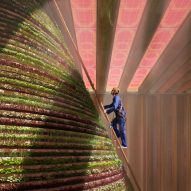 The solar designer imagines a near future where these panels could turn whole cities into living batteries, with rooftops and windows transformed into solar panels.

"In the future, I hope a house will be [considered] broken if it doesn't generate energy," she said in her VDF talk.

As well as green energy supply, these panels could address other problems facing humanity, such as food shortages.

Solar-powered facades are a new frontier for architects and designers. In Seoul, UNStudio has studded an office tower with strategically-placed solar panels, and Kiki & Joost has developed a collection of facade and roof tiles with glittering finishes designed to be more attractive than standard solar panels.

Images are by V8 Architects.