The architecture studio designed the red housing block to incorporate the colours of the roofs of the surrounding buildings and the forms of local port wine cellars.

"Our approach centred around balancing the visual references from the surrounding area, reinterpreting those references through a contemporary lens, and ensuring we achieved the right scale and proportion in relation to the surrounding buildings," explained António Morgado, co-founder of Caiano Morgado Arquitectos.

The block's distinctive monotone colour was chosen from a desire to create uniformity across the block's walls and roofs as well as a need to comply with local planning regulations.

"We chose the clay colour because the local regulations set out that all buildings must have a clay roof, or similar," Morgado told Dezeen.

"The very shape of the terrain, which is somewhat steep, means that those clay roofs are very dominant in the landscape," he continued. "Given that the roof would have to be clay coloured, we decided to use it for the entire building since we were looking for obtaining this image of synthesis and unity for the building."

The apartment block contains a total of nine split-level flats. Two-bedroom flats are spread across three floors, with one bedroom flats and studios on two floors. 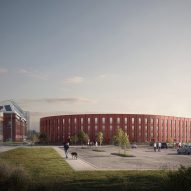 Although the block's form broadly mirrors a row of houses, with six gable ends facing the street, the main facade has almost no windows. It is broken only by the entrances to the flats and two small circular windows.

"The location is very narrow and the more interesting side of the building is not facing the street," said Morgado.

"With west-facing windows you get not only better light, but also the view of the river," he continued.

"This is why we placed the staircase on the street-facing side of the building, so that the main rooms – the bedrooms and living area – could face west and allow for the view. We did however include two small round windows on the front of the building, marking its start and end points."

Caiano Morgado Arquitectos is awaiting final construction permits for the project and expects it to be completed in 2022.

Other recently completed red buildings include a fire station in Antwerp designed by Happel Cornelisse Verhoeven and a school in India by Sanjay Puri Architects. Graeme Nicholls Architects has also designed a red stadium-shaped housing block alongside Ibrox in Glasgow.