Dutch architecture studio OMA and landscape architect LOLA have revealed the updated design for the 63,000-seater Feyenoord Stadium, which will be the largest stadium in the Netherlands.

The stadium, which will become the new home for top-tier Dutch football club Feyenoord, will be located alongside the Nieuwe Maas river as part of OMA's masterplan for the redevelopment of Rotterdam Zuid.

Working with landscape architect LOLA, the Rotterdam-based architecture studio designed the stadium to be integrated into the redeveloped neighbourhood. The principle way in which this will be achieved is by raising up the stadium's concourse and making it a publicly accessible area.

"The core of the design is the stadium's central position in Rotterdam Zuid, and its relationship with the river Nieuwe Maas," explained OMA's managing partner David Gianotten.

"By lifting up the public domain of the stadium, we have created a new balcony over the river, on which the new stadium takes its iconic position," he told Dezeen.

OMA first released images of the stadium in 2018 and has been refining the design in discussion with contractors and the club since.

One of the key changes was the relocation of the stadium's food stands from inside the stadium to the public areas surrounding it,  to reinforce the integration into the new development and encourage use on non-match days.

"Part of the effort is the placement of food and beverage spaces, which were at first part of the building, on the stadium’s public concourse and to the side of the park, in order to create a fan zone and a 24/7 food and beverage facility that also functions optimally during non-match days," said Gianotten.

Feyenoord Stadium will be built to replace the club's current 1930s stadium, which is known as De Kuip, or the tub. OMA have tried to integrate both the form and feeling of the historic stadium into its new design. 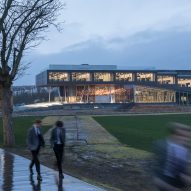 "In the design of the new Feyenoord Stadium, we tried to create all possibilities to maintain such atmosphere," he continued. "As a result, we worked again with an oval shape. You can see resemblance to De Kuip from the outside of the new stadium integrated with the steel diagrid, which carries the two upper tiers of the stadium."

The stadium itself will be a complete bowl, mirroring De Kuip, with 12 concrete cores supporting a diagram steel structure that holds up the roof and the stands. Inside, all of the seats within the three-tier stands will have uninterrupted views of the pitch.

"It is a robust architecture that references the workers' mentality of Rotterdam," explained Gianotten.

"At the same time, its state of the art design offers Feyenoord supporters the best possible view of the pitch," he continued.

"Its oval bowl shape and tier design that places spectators as close to the pitch as possible ensure that players are surrounded by a sea of supporters, while not being interrupted. This leads to the most intense atmosphere in matches, which Feyenoord is so well-known for."

Feyenoord Stadium will be the first stadium built by OMA, and Gianotten believes its main contribution to the future of stadium design is the way the building relates to the city.

"As a practice, we are consistent in searching for new possibilities in form, program, materiality, and work process. Such explorations allow us to bring new definitions to architectural typologies," he said.

"In this case, our experimentation with the existing stadium typology has led to a stadium that also functions as a public space for daily usage, and it becomes a key destination within the city at all times. This is arguably a new kind of stadium that could inform future design."

OMA is a Dutch architecture studio founded in 1975 by Dutch architect Rem Koolhaas. It is currently designing a garden bridge in Washington DC, a rural culture complex for Melbourne's outskirts and a "cliff-like" headquarters for SNCB in Brussels.

Renderings are by Beauty and The Bitunless stated.