Architecture studio Snøhetta has built a group of timber cabins overlooking the Jostedalen glacier in Norway to replace accommodation buildings that were destroyed by a cyclone.

Arranged around the peak of a hill the hiking cabins were built for the for a local branch of the Norwegian National Trekking Association. They replace the original Tungestølen Tourist Cabin, which was destroyed by cyclone Dagmar in 2011.

Designed with the fate of the previous building in mind, Snøhetta gave the new cabins a robust form. Each of the buildings' outward-facing walls has a pointed shape to help deflect wind coming up the valley.

This design feature unites the main dining block, dormitory building and individual cabins by giving them all pentagonal sections.

"Although the colours and materials of Tungestølen are inspired by other surrounding cabins, these new cabins represent something new and also surprising," she told Dezeen.

The main cabin contains a lounge with an open fireplace and communal dining area within the pentagon-shaped form. Alongside this building is a dormitory block that can accommodate 30 visitors and a storage building, which is also pentagonal. 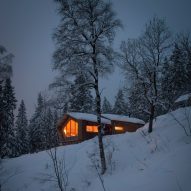 A single, four-bed cabin has been completed, with four more planned to be built on the site. One of these will be the same design as the architecture studio's Fuglemyrhytta cabin, which is located near to Oslo.

Snøhetta designed the buildings so that they would have a minimal visual impact on the area and be secondary to the surrounding landscape.

As well as trying to lessen the visual impact, the architecture studio aimed to minimise the environmental impact on the buildings.

Each of the cabins was made from timber, with a glulam frame combined with cross-laminated timber (CLT) walls that are clad in pine.

"The core design concept was to make cabins with a minimal physical footprint that can withstand storms and harsh weather while still creating a generous atmosphere," said Haug.

"The wooden cladding and gabled roof mark a continuation with the original cabin. The 'tun' – farmyard, in front of the cabins, is also something that has been kept."

Throughout the interiors of the cabins, Snøhetta combined the exposed timber walls with textiles and artefacts rescued from the previous cabin.

"The use of wood makes the cabins both robust and cosy," said Haug.

"We've added woollen textiles for comfort and adorned the walls with memorabilia like an old ice axe, maps and other artefacts from the old Tungestølen cabin. The open fireplace also adds a comfortable and welcoming feeling."

As well as the Fuglemyrhyttawalkers cabin, the studio has recently designed a seed vault visitor centre on Svalbard and a public garden at Phillip Johnson's AT&T building.