OMA has revealed its plans to renovate and extend three vacant railway buildings in Brussels to create an office for Belgium train operator SNCB.

The proposal will create workspaces for 4,000 employees of SNCB, otherwise known as the National Railway Company of Belgium, beside the Brussels-South train station.

Designed by OMA with Jaspers-Eyers to contrast with the existing brick buildings, the 11-storey extension will measure 236-metres in length.

"Contemporary Brussels is both historic and modern, national and European, regional and cosmopolitan. That is its essence – in the mediation between presumed opposites. It is this reality that our project intends to express," said OMA partner Reinier de Graaf.

"It is borne out of the creative tension between an expectation for the future, and a respect for futures past," he continued.

"It embraces the Belgian Brussels, with its early, and often courageous expressions of modern architecture, and the European Brussels, for which the European railway and the Brussels-South stand as symbols."

OMA and Jaspers-Eyers' proposal was the winning design in a competition for the headquarters, which was organised by SNCB. It is OMA's first large-scale project in Belgium.

The three existing buildings that will be overhauled as part of the project were built as an ensemble for the Brussels World's Fair (Expo 58) and have been empty for two decades.

They previously contained workspaces and a post office for the Brussels-South station when the country's postal service was connected to the rail network. 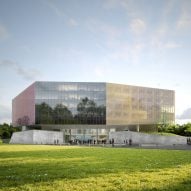 To create the headquarters, the old post office will be transformed into The Mid-Office, which will contain conference and training rooms, alongside a 200-seat auditorium, fitness centre and restaurant.

The new 11-storey extension will also be dedicated to private office spaces, and bring the headquarters to a total size of 75,000 square metres.

At ground level, the extension will also have several retail spaces and entrances to "improve the street's appeal to the passer-by".

Though connected to the existing structures, the extension will sit in contrast to them with a "sheer, cliff-like facade" punctured by a series of circular windows.

At the centre, these windows will dissipate to reveal three-storey entrance lobby – designed to be visible from street and train tracks.

"The portholes, cut out from the frit applied to the glass panels, render the facade of the new volume as an abstract background to the three existing buildings," de Graaf told Dezeen.

"In its openness to the tracks, the building offers a playful disclosure of its inner workings – a move to convey the transparency of the organisation to the public it serves," added OMA.

"There is no back to the building in conventional terms. In its address, it is full frontal."

It is headquarters is based in Rotterdam, and it also has offices in Hong Kong, Beijing, New York, Dubai, Doha and Sydney.

Other recent projects by the studio include proposals for an angular extension for SANAA's New Museum and a department store and hotel in Vienna.

Visuals are by Luxigon, courtesy of OMA unless stated.