Sergey Makhno Architects has envisioned a concrete home built like a bunker for enduring the "unpleasant surprises" that may await in the post-pandemic world.

Kyiv-based studio Sergey Makhno Architects told Dezeen that the global coronavirus crisis was the "trigger" for visualising Underground House Plan B, a piece of conceptual architecture.

"We realised that the world has many more unpleasant surprises for us, to which even the most highly developed environmentally, socially and technically savvy countries may not be ready," said the studio.

However, instead of creating a typically austere bunker, the studio envisioned a cosy hideout where someone would like to live "even when there is no apocalypse".

In renderings, the home is pictured in a clearing of trees in the Ukrainian forest. A helipad would allow occupants to land while evacuating to their bunker.

"We were interested in the question of whether it is possible with the help of architectural solutions to recreate a full life for a long time underground," it continued.

"Where, in addition to being able to take cover from any cataclysms and viruses, Underground House Plan B residents can preserve their values ​​and hobbies."

The above-ground portion of Underground House Plan B would comprise two intersecting volumes made from concrete – a material specifically selected for its ability to "speak of reliability, but also be aesthetically attractive".

One of the volumes would be shaped like an upside-down cone, with the flat top serving as a helipad. The other volume would be rectilinear, partially cut away to form a curving entrance.

A spiral staircase would lead down to the subterranean part of the home that the studio imagines as a series of circular layers.

The first layer, which would sit 15 metres below ground, hosts a series of living spaces designed to comfortably accommodate two or three families.

This would include a spacious lounge anchored by a pair of huge curving partition walls.

One wall would be lined with full-height bookshelves to form a library, while the other encloses a huge cushioned sofa – this area would double-up as a home cinema.

At the centre of the lounge would be a cylindrical lightwell, backlit to appear as if the sun is shining down from the outdoors and planted with a faux tree.

A panel of imitation greenery would also serve as the backdrop to the home's communal dining area.

"We were interested in experimenting with the underground space in such a way as to create the illusion of being above the surface as if you could look out the window and see the blue sky," explained the studio. 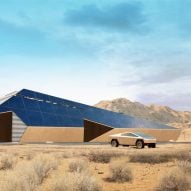 "Modern people are too accustomed to freedom and lack of restrictions," continued architect at the studio Ihor Havrylenko.

"Life in a bunker, even a very comfortable one, is life within frames – we tried to design the space so that people could feel them minimally."

Illusions of the outdoors would also been created in the home's sleeping quarters. One of the master bedrooms is envisaged as having a floor-to-ceiling digital screen in place of a window that could be adjusted to show different scenes like snow-powdered mountains or a Kyiv street.

Another cavernous bedroom would be fronted by winding trails of faux ivy.

The studio also decided to include a professional-grade kitchen complete with steel cabinetry and prep counters – just in case the imagined inhabitants pick up cooking as a hobby while waiting for the outside world to recover.

There would also be a garden room dedicated to growing fresh vegetables and fruit, as well as a medical room, a planted room for walking pets and a disinfection pod.

To keep fit, the inhabitants could head to the home gym. It would include an ultra-minimal meditation room and a pool, illuminated with green-hued lights to make users feel like they're in a grotto or the ocean instead of "a soulless sports pool".

This entire layer of Underground House Plan B would be surrounded by an "evacuation ring" that can be accessed from almost every room, should there ever be the need to escape the property. 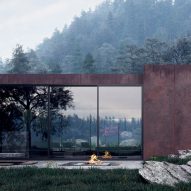 Further underground would be an area dedicated to water treatment systems and generators, with a well to supply water further below.

"This project is a reflection on the continuation of human life under any circumstances, and an attempt to find an answer to the question of whether architecture can create the impression of life at the surface while being in its depths," concluded architect at the studio Serhii Makhno.

This isn't the first conceptual project by Sergey Makhno Architects – back in 2017, the studio unveiled visuals of an imaginary weathered-steel home.

It would be nestled at the base of Ukraine's Carpathian Mountains, serving as a quiet getaway for a "contemporary nomad" tired of city life.