In the final instalment of Lensvelt's collaboration with Virtual Design Festival, the Dutch design brand showcases three seating collections at the VDF products fair by OMA, Richard Hutten and Staat.

All three collections, which include statement chairs and modular sofas, are now viewable in detail at the Virtual Design Festival products fair.

The showcase marks the end of the VDF x Lensvelt collaboration taking place this week and included a series of live talks with the brand's founder and collaborators, as well as seven other exhibits at the products fair.

The first product on show in this final collection is Blocks, a modular sofa system designed by Dutch architecture studio OMA with an "abstract and almost architectural quality".

Blocks is composed of chairs, benches and bar chairs that can be arranged to form various seating configurations. Each unit can be finished with a base of either four steel legs or a solid plinth.

One of the two chairs in Lensvelt's final showcase is This Bucket Chair by Richard Hutten, which is characterised by its tub-like seat that is sculpted from plastic, available in several colours and mounted on an interchangeable base.

It was developed by Lensvelt and Hutten with the goal of it becoming an "instant classic" that was also enduring. It can be fully disassembled to easily replace or clean parts.

The final product on show is D-Chair by Staat, a piece celebrated for its slender, metallic frame that resembles an insect's legs and incorporates a handle that doubles as a clothes hanger.

It was developed by Staat in 2017 as part of a wider hotel development, with the ambition for it to "define the whole interior". It is available with either a stained-wood or upholstered seat. 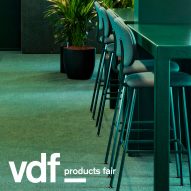 The other Lensvelt products at the VDF products fair include furniture by Maarten Baas, Fabio Novembre and Studio Job and the AVL collection by Atelier van Lieshout.

Among the other exhibitors at the fair are Swiss furniture brand Vitra, British brand Modus and Shanghai brand Stellar Works.