Model maker and photographer Frank Kunert explores the "absurdity of life" through his meticulous architectural models with a twist.

In Under The Bridge, a support column for a motorway flyer has been converted into a sweet little townhouse, and in Climbing Holidays a roadside motel is accessible only via a pylon laddered with rungs.

"It all starts with an idea that deals with the absurdity of life," Kunert told Dezeen.

"These ideas develop from playing around with words and phrases. Communication and the sometimes rather weird ways of how people deal with each other is a never-ending topic in my work," he added.

Kunert finds black comedy by exaggerating the indignities of urban living for his models, which he makes from everyday materials.

In One Bedroom Apartment, a doorway opens on to a cupboard-sized home with a mattress wedged at an angle over a toilet, while a cute balcony with trees and a parasol juts out incongruously from the side of a power station belching pollution in Small Paradise.

For a Place In The Sun, he uses balconies to illustrate life for the haves and the have-nots, where a shiny new development has an outdoor terrace that cantilevers over their shabby neighbour's own balcony below, blocking out the light.

He pokes fun at culture too, placing a contemporary art gallery in a groovy brutalist building with front steps that end in mid-air, completely inaccessible. He gave this piece the tongue-in-cheek title of At A High Level.

"I hope the viewer is amused but also feels the melancholy of my works and the ambivalence of life, the comedy and tragedy of our so-called civilised world," said Kunert.

The scenes never involve a direct copy of an existing building, but Kunert said he finds all architecture and architectural styles "exciting".

"I often get my inspiration from very ordinary, sometimes 'ugly' or boring architecture," he explained.

"But none of the buildings in my photographs exist in reality. It's often a typical element or a certain symbol for an architectural style or an era rather than the whole building itself that catches my eye and that starts me off."

Having started making models in the 80s, Kunert built his first architectural set for photographing in 1994. He starts by sketching the scene, he said, before moving on to the model-making process.

To make the building walls he uses foam panels, wooden sticks and cardboard that he sources from art supplies shops. Kunert scours dollhouse shops and flea markets for miniature objects such as cups and patterned rugs. 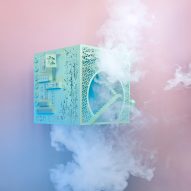 "I also have a shelf with boxes full of collected stuff such as packaging waste," he said.

"You never know if you need anything apparently worthless to be transformed into a gem. For example, the top of a washing-up liquid bottle becomes an inlet pipe or a doily changes into a curtain."

As for many other creatives, the coronavirus pandemic and lockdown has found its way into his art.

"The situation has definitively affected my latest works, especially A Room With a View," he said.

In this latest work, what appears to be a minimal living room with a floor-to-ceiling window has a stylish mid-century chaise lounge that turns into a diving board that sticks out into clouds.

Kunert said social distancing has also caused him to look at older pieces in a new light, such as 2017 piece simply titled Privacy where a round dining table is divided into individual dining booths.

"Many of my scenes match our so-called 'new normal' which isn't all that surprising," he said. "I'm driven by the topic of communication and society."

Several other creatives have turned to model-making as an artistic outlet during the pandemic.

Artists Camille Benoit and Mariana Gella made fantastical models of cities out of paper during lockdown, and Brooklyn designer Eny Lee Parker held a competition on Instagram to make interiors out of clay during quarantine.