British practice Ström Architects has completed Island Rest, a low-lying holiday home in the Isle of Wight that is clad in beams of blackened larch wood.

Island Rest has been designed by Ström Architects as a "home away from home" for a family of four, who wanted a place where they could spend quality time together.

The house is nestled in a creek that looks out across The Solent, a 20-mile-long stretch of water that separates the Isle of Wight from mainland England.

First revealed in a series of renderings in 2018, the now-complete Island Rest house comprises a single-storey rectilinear volume clad with beams of black-stained larch wood.

A low-lying structure was specifically chosen so as not to compromise views of the surrounding natural landscape.

"We wanted the house to sit quietly against the backdrop of trees, while feeling like it embraced the views when looking out," said the practice.

"Our clients asked for an architecturally timeless building, drawing on the very best modern architectural concepts to create a whole – no frivolous moves; rigour must flow through every space and every detail that the building is."

As the area surrounding Island Rest is prone to flooding, it has been positioned to sit at the highest point of the site.

At one end the house is supported by a grassy hill, but as this gradually slopes away, slim metal poles are instead used to elevate the structure. 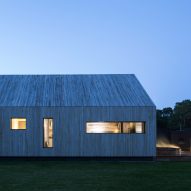 Expansive panels of glazing have also been fitted on both sides of the home to maximise sightlines and natural light.

Inside lies an open-plan living and dining area, complete with a jet-black kitchen suite. This leads off to a fleet of bedrooms for the owners' three young children.

Each room has been given a largely simple fit-out to make them "places to sleep and not places to stay", in a bid to encourage the children to spend more time playing outdoors.

To give the parents a greater sense of privacy, their bedroom has been placed on the opposite side of the house.

It has ensuite bathroom facilities and access to a small deck that leads down to the swimming pool and verdant garden.

"Landscaping was a consideration from the outset and has a very natural and organic feel, with mowed paths through wildflowers leading to and defining areas of different function and interest," added the practice.

Ström Architects was established in 2010 and is based in the New Forest, a district of Hampshire, England.

Other homes on the picturesque Isle of Wight include The Sett by Dow Jones Architects, which takes design cues from black-painted fishermen sheds seen dotted along the island's beaches.

There's also House for a Yachtsman by The Manser Practice, which is punctuated by several glazed openings.

Photography is by Nick Hufton of Hufton + Crow.