British studio Ström Architects designed this timber-clad annex to house a bar and games room for a home in England's New Forest he completed seven years ago.

Watson House Annexe replaced an existing two-storey structure demolished prior to its construction. It is situated in the garden of the client's main residence which – like the annex – is clad in sweet chestnut wood and black brick. Magnus Ström worked on the design for the residence while working at John Pardey Architects.

While the materials are intended to offer visual continuity between the main house and the new addition, the annex's pitched roof and small windows give it its own distinct character.

A key aspect of the brief was to ensure that the building would be suitable for parties and social gatherings, and provide additional accommodation when needed.

"The client wanted to demolish the existing annexe on site, and replace it with a more comfortable, fun party house," architect Emma Ward-Lambert told Dezeen.

"He wanted a cosy building that felt like a rustic boutique hotel, as weekend accommodation for guests and his adult children, hosting small relaxed groups of revellers," she explained.

"We set about focusing on how and when the spaces would be used – primarily in the evenings for drinking, dancing, relaxing and partying."

As such, the project has a different feel to the studio's other projects, which are characterised by their large open spaces and abundance of natural daylight.

Instead, small slot-like windows are positioned sparsely around the structure, limiting views to the surrounding forest.

"We sought to focus the users more internally, limiting the views out, keeping spaces moody and darker, and providing more tactile internal finishes that can stand up to the wear and tear of parties," said Ward-Lambert.

For the interior, Ström chose to position a double-height living area on one side of the space, equipped with a bar and games facilities.

Two compact bedrooms for short-stay guests are located on the other side of the structure, which can be accessed via a grey Valchromat MDF partition.

Above this is a storage mezzanine space that can be accessed via a ladder made from blackened steel.

On the terrace there is a semi-sunken hot tub where the residents can relax and enjoy their surroundings.

A built-in brick pizza oven and a bench that doubles as a niche for fire wood also provide further opportunities for socialising outdoors.

As the New Forest is an ecologically sensitive site, the architects undertook extensive wildlife surveys prior to the building's construction to ensure all necessary measures were in place to protect the natural habitat of different species.

"Works were carefully planned around roosting and nesting periods for birds and bats, and vegetation was cleared to best suit the active reptile season and encourage their dispersal from the construction areas," said Ward-Lambert.

"Before and during demolition we had specialist ecologists on site to ensure that no bats were directly disturbed by the works, and we installed several bat boxes in the surrounding trees and on the completed building," she added.

"The building also occupies a similar footprint and location as the original annex, so we could be comfortable that we were not encroaching on existing habitats."

Ström Architects was founded by Magnus Ström in 2010. The studio's other projects have included a larch-clad retirement residence and designs for a luxury residence developed to launch a bespoke architectural service for super-rich clients. 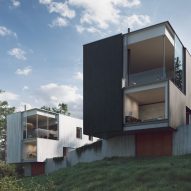