Japanese architecture firm Vegahouse has ventured into furniture design, using the traditional craft of bamboo weaving to make a minimal and modern stool.

The Zalue stool features a black iron frame and a round seat that resembles the lid of a bamboo steamer.

To preserve the individual beauty of these two materials the seat is simply placed on top of the frame. It's propped up by a central ring and held in place by three kinked legs, rather than being physically joined together.

"When combining different materials, other materials such as bolts, hardware or strings are often added to hold them together," Vegahouse director Yuki Nagata told Dezeen.

"But I thought that adding another element would interfere with their sharpness and delicate form. So we came up with the idea of simply covering the stool with bamboo, which is easier and more beautiful." 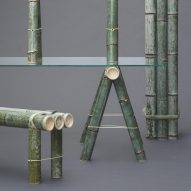 With its removable seat, the design lends itself to being used outdoors while its three legs allow it to stand stably even on uneven ground. The frame itself is stackable, light and can be lifted with one hand.

Based in Kagoshima prefecture, which is home to Japan's largest bamboo forests, Vegahouse wanted to make use of this abundant natural resource while working with local craftsmen to pass on their techniques.

"There aren't many chairs woven from bamboo, so they refused me at first because they were worried about whether it could bear the load of people," said Nagata.

"But I went back to talk to them and we repeated trial production many times, examining the durability and design."

Vegahouse wanted a wide, open weave, to allow the sun to pass through and cast shadows on the floor. This meant that thicker bamboo threads need to be used, to make up for the lack of density.

To stop the weave from distorting under the weight of the occupant, the craftsmen added a solid bamboo ring around the circumference to lock in the shape, creating a seat that is both strong and light at the same time.

"The technique and wisdom of many craftsmen are packed into a simple recipe," Nagata said.

"New technologies are born every day but I would like to preserve and convey the old technologies to the future world."

The Zalue stool is longlisted for this year's Dezeen Award in the furniture design category.