Last week, under the cover of darkness, a construction team, dressed all in black, set to work in Hertfordshire near London. Within minutes they had erected two bamboo and steel cable towers, each three storeys high, blockading the road to the Broxbourne printworks of media baron Rupert Murdoch.

Locked onto each tower were Extinction Rebellion protesters accusing the Murdoch press empire of failing to report the most burning issue of our time; global heating. Thirteen hours later, despite extensive efforts, the British police had failed to remove the protestors from their perches. Murdoch's Saturday papers had to be pulped. Extinction Rebellion, and their two towers, had won.

Architecture rarely makes the headlines, yet all of a sudden these two structures were at the centre of a national debate

Eighty per cent of the UK's print media is owned by just five billionaires, many of whom are major donors to the ruling Conservative Party, so it was no surprise that the protest sent broadsheet columnists and ministers into frothing hysterics. Home Secretary Priti Patel labeled the peaceful demonstration an attack "on society and democracy", while moving to designate the climate change activists as an organised crime group – the towers had touched a nerve.

Architecture rarely makes the headlines, yet all of a sudden these two structures were splashed across front pages at the centre of a national debate – put there not by starchitects but by environmentalists. The towers were innovative, eye-catching, ecologically sound and socially purposeful – a combination contemporary practice rarely achieves. They are the most gutsy architecture of the year and, I'd argue, worthy contenders for the Stirling Prize.

Furthermore, the tensegrity structures, their three modules seeming to hang effortlessly in the air, have rekindled the spirit of early high-tech, a style that once had much to teach us about sustainable design. High-tech emerged from the ecological techno-optimism of post-war experimentation. German architect Frei Otto's Institute of Lightweight Structures and Buckminster Fuller's challenge for designers to “do more with less” had laid the groundwork for a nimble and environmentally conscientious form of Modernism.

Early high-tech projects were both structurally exuberant and sustainably efficient

Others, like artist Kenneth Snelson, and provocateur Cedric Price were exploring tensegrity (a portmanteau of tension and integrity) to make structures that seemed to hover. Price's 1961 Aviary at London Zoo and Otto's sweeping canopies for the 1967 Montreal World Expo spoke of an architecture that, though hugely charismatic, was frugal in its use of materials – chiming with Bucky's environmentalist Operating Manual for Spaceship Earth, published in 1969.

It was into this heady eco-techno milieu that young Norman Foster, Renzo Piano, Richard Rogers and many other key pioneers of high-tech graduated. At first, their drawing boards burst with vivacious depictions of human, machine and nature thriving in symbiosis. Early high-tech projects like the 1977 Pompidou Centre by Rogers and Piano, or Foster's 1982 Renault Centre were both structurally exuberant and sustainably efficient. 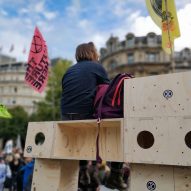 Then something changed. High-tech beefed up, now producing massive buildings for global financial corporations like HSBC and Lloyds of London. Today high-tech has morphed far from its roots into the default style of global corporatism.

Towering superstructures and international airports, many produced by exactly the same offices whose work once brimmed with counter-cultural idealism, have replaced the delicate "more with less" experiments of previous decades. Have XR picked up a torch, long dropped by high-tech's founding fathers?

"I was at the Bartlett when I was young," said Julian Maynard Smith, founder of performance art group Station House Opera and designer of the XR towers with engineer Morgan Trowland. "I never finished the course but I knew about Price, Fuller, Otto and all that. I've always been fascinated by three-dimensional space."

"We started using Bamboo tripods at XR about a year ago. We put a structure up in Oxford Circus – three tripods with a tripod on top. But I never found the tripod a very elegant structure and the police can just drive a forklift up to it and arrest the activists. With the tensegrity towers, you can be right in the middle of them and the police can't get to you. In the frame of XR you want to take over a space as long as possible — make it difficult for the police to take you away."

This is the core design problem of most protest architecture: how to make a structure that is easily built but, with an activist's body attached, impossible to move. It is a conundrum that has generated a huge variety of structures over the years.

In 1994, protesters strung an elaborate web of netting between houses, trees and improvised towers along Claremont Road in Hackney to block the construction of a new motorway link road. The activists could move freely across the web, encumbering the progress of construction vehicles while remaining out of reach of the police.

In Notre-Dame-des-Landes, hundreds of squatters built a settlement of structures (including a makeshift bakery, brewery and pirate radio station) scattered across 1,650 hectares of French agricultural land to derail a proposed airport.

Maynard Smith and Trowland's XR towers are the latest chapter in this ecowarrior architectural history and seem something of a game-changer.

"The police don't know what to do with them," said Maynard Smith. "They look very flimsy. If you cut a cable, the whole thing falls apart but they are strong enough to climb. That was the idea – we could construct them off-site, run with them, and plonk them up in a minute. The police are now quick to stop protest structures going up so it's a question of surprise!"

XR's Towers have revitalised a vital dimension of high-tech's heyday that many thought had died with Frei Otto. They are an ingenious and exuberant splinter in the arse of the establishment and a refreshing reminder of design's social potential. They deserve, though won't get, the 2020 Stirling Prize.

And according to Maynard Smith, there are more towers being fabricated as you read this. "Where will they go?" I can sense his wry smile down the phone. "We'll have to wait and see. But if there's a group of people who want it to happen – it will happen."