This year's London Design Festival was a quiet affair with designers, brands and organisations combining modest physical presences with digital experiments amid the coronavirus pandemic.

The pared-back festival, which ran from 12 to 20 September, featured a smattering of shows around the city. Participants reported low footfall but a positive mood at one of the first architecture and design events to take place since lockdown.

It came shortly after the rescheduled 3 Days of Design in Copenhagen, where attendees reported a "celebratory" mood, and coincided with Open House London, which completely revamped its programme due to the "fiendish challenge" posed by the pandemic.

At LDF, many events moved entirely online with the annual London Design Medals dinner replaced with a virtual picnic, with guests provided with hampers of food to eat while they watched proceedings from home via Zoom.

Instead of hosting glitzy showroom parties, design brands invested in digital showcases and held invitation-only, face-to-face briefings with journalists and clients. Some said this was more effective than the open-door policy of previous years.

"What we've found is that it's easier to tell the story behind the products on a more personal basis," said Sara Nosrati, head of communications at Italian furniture brand Cassina.

"That creates a stronger connection rather than having 300 people at a cocktail party where maybe they don't get a connection with the products because they are talking to other people."

"It won't go back to the previous way of showing things only physically," said Cassina CEO Luca Fuso. "Now it will always be a combination of digital and physical."

British designer Lee Broom, whose elaborate showroom presentations are always a highlight of LDF, this year kept his premises closed and instead launched his Maestro chair with a dramatic short film, which featured in a window display as well as being streamed online.

"After initially feeling quite demotivated about the fact we couldn't physically present things in the way we usually would, I woke up one day and thought: hang on, surely this is the opportunity you need as a designer to create something you haven't done before?" Broom told Dezeen.

"As designers, we work well with boundaries and restrictions: they enhance your work rather than limit it," he continued, explaining his decision to work on a film instead of an exhibition.

"I am not saying it is the end of physical shows for us at all," Broom added. "I love the presence of a live audience. However, I do think there is an opportunity here to step out of our comfort zones and change things up."

The format of virtual presentations supporting smaller physical shows is something that designjunction founder Deborah Spencer believes we will see more of at future design shows.

"There is a clear move towards hybrid events which enable organisers to dial up or dial down their online and physical presence depending on the market landscape," said Spencer, who this year launched a new event called Planted as part of LDF.

The event focused on reconnecting our cities with the natural world through a virtual showcase on Dezeen as well as a series of panel talks about sustainable design. These were held on an open-air stage at Granary Square in Kings Cross and later posted online.

"I'd say the future is more online, but no way is it completely online," added Spencer.

"After lockdown, there was an appetite for something new"

London furniture maker Jan Hendzel, another designer who created a video diary to supplement his physical show, helped to establish the inaugural Peckham Design Trail in south London this year.

He said that the event has offered a much-needed feeling of community in the wake of a summer spent largely in lockdown.

"Our first thoughts were that it might be risky to set up a design trail in the middle of Covid-19 but, in actual fact, there was an energy and excitement coming from the people we spoke to about it," he told Dezeen.

"We thought that after lockdown there might be an appetite for something new and we were right. Most people were really happy to be discovering things in their neighbourhood. The feeling of community on the trail made LDF 2020 a real highlight of the year for us."

Along with designers, major institutions like the Design Museum focused on digital offerings. For this year's LDF, the museum made video diaries to offer a behind-the-scenes look at the making of its Connected installation, which saw designers including Thomas Heatherwick and Sabine Marcelis create desks for home offices.

"In order to capture the development of the project, we used a combination of digital assets including Zoom interviews and sketches to compliment the final display," said the museum's director and chief executive Tim Marlow.

"It was brilliant to hear how designers have kept occupied during lockdown and the ways they are thinking of design solutions to improve the future."

Others like the Victoria & Albert Museum, which previously acted as the central hub for the festival and last year played host to 12 different installations and a programme of talks, abandoned physical events altogether. 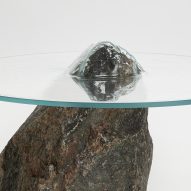 "Due to the V&A's focus on re-opening and ensuring the latest social distancing measures were in place, it was not possible for newly commissioned content to be installed within the museum this year," Christopher Turner, the museum's keeper of design, architecture and digital told Dezeen.

"However, we contributed to LDF's digital programme, sharing virtual tours of the museum online each day to remind everyone that the museum is open again, after the longest period of closure since world war two."

Studio Weave director Je Ahn believes that although there was some interesting online content, there was still a need for physical events.

"I've seen a lot of LDF content online but it's quite different isn't it?" said Ahn. "You can't judge a building or a design by looking at a photograph. You have to be there to see it, to touch it. So from my end, the experience was quite superficial."

Brompton Design District, usually one of the most vibrant parts of the festival, only featured two pop-up exhibitions this. Jane Withers, its curator, agreed that there is a strong desire for people to see designs and installations in person.

"A lot of people are visiting online but I think we're all getting a bit fed up of seeing another photo of a chair on the internet," said Withers.

"We all want to go out and see something real if we can and if we're near enough."

London Design Festival ran from 12 to 2o September at venues across London and online. See Dezeen Events Guide for an up-to-date list of architecture and design events taking place around the world.

More from the London Design Festival