Colour company Pantone and health brand Intimina have collaborated to create an "active and adventurous" red colour to start a positive conversation around periods.

The blood-red hue is presented on a Pantone-branded card with an outline of a womb and ovary with a menstrual cup inside.

Intimina makes several different models of these reusable cups, which are designed to fit comfortably inside the body and offer a low-cost and sustainable way for people to manage menstrual flow.

The Swedish health company partnered with Pantone to create an eye-catching shade with the aim of normalising conversations about periods.

"We were very honoured to partner with Intimina on the creation of Period, a confident red shade," said Pantone vice president Laurie Pressman.

"An active and adventurous red hue, courageous Period emboldens people who menstruate to feel proud of who they are," she added. 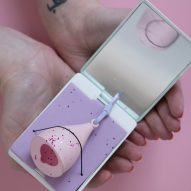 The brand-new red will be one of the thousands of shades offered by Pantone as part of its colour-matching service.

"Despite the fact that billions of people experience menstruation, it has historically been treated as something that shouldn't be seen or talked about publicly," said Intimina global brand manager Danela Žagar.

"Enough is enough, it's 2020. Isn't it time periods stop being considered as a private affair or a negative experience? Isn't it time we call out people that try to perpetuate the stigma surrounding periods?"

Period Red is part of a campaign called Seen + Heard, which also included a donation from Intimina to Action Aid. The charity helps people living in poverty where managing periods is an extra financial and social burden.

Sliding packaging design shows where to put your Thinx tampon

"Around the world today, millions of women and girls still suffer due to the stigma associated with periods," said Action Aid director of policy Jillian Popkins.

"Many girls miss vital days of school, or even drop out altogether, which is one reason so many women experience life-long poverty globally."

Other designers tackling period problems include Dame, a company that makes reusable tampon applicators, and a campaign designed by Pentagram that lobbies against the tax on menstrual products.

Pantone added over 300 other colours to its roster this year, including 50 shades of pink with evocative names such as First Blush, Viva Magenta and Tender Touch.