Oak slats are steam-bent to form the undulating handles of the Bue Brushes, handmade by Norwegian designer Poppy Lawman to encourage a slower, more conscious way of living.

The tabletop crumb brushes, which have been shortlisted for this year's Dezeen Award in the homeware design category, are made entirely from biodegradable materials, with coconut fibre bristles sewn into the handle using linen thread.

This leaves the stitches exposed, drawing attention to the amount of time and work that went into creating the product.

"In modern society, we have so many utilitarian objects in our lives that we hide in dark unorganised cupboards and have little connection to," Lawman told Dezeen.

"Slow design focuses on creating objects that connect us more deeply to what we are doing and promote living in the moment. The brushes offer a way to elevate the humble act of sweeping, by turning it into an enjoyable experience."

To create the handles, which are shaped like either the letters U or S, the wood is treated using the traditional craft technique of steam bending. 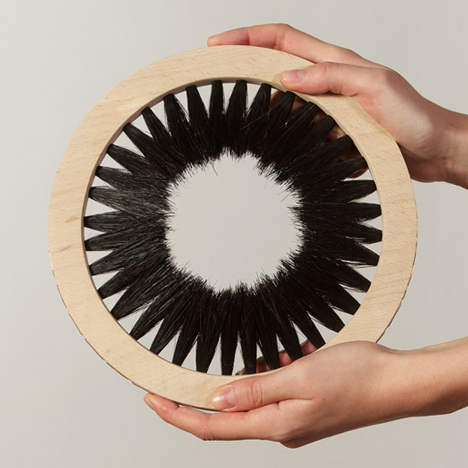 First, steam is used to heat it to 212 degrees Celcius, at which point the organic polymer lignin, which normally strengthens the wood's cell walls, becomes pliable.

Once removed from the heat, the designer has around one minute to re-shape the pieces before they re-harden.

"The juxtaposition between the brushes having these flowing, fluid curves, that are made from a material we primarily use in plank form has a certain beauty and intrigue to me," said Lawman.

"The double-bent brush has close to the tightest curvature that can be achieved with oak using the steam-bending process, and there is a certain delight in pushing a technique and material to its limits to create these ribbons of wood."

By paying extraordinary attention to the details of an ordinary object, Lawman wants to encourage its users to do the same.

This, she hopes, will have the ultimate benefit of creating a deeper connection to the products we use while decreasing the rate at which we choose to discard or replace them.

"It was important for me that they are not just objects that you would hide in your cupboard but ones that can be enjoyed in and out of use, like sculptures with utility," she added.

As well as the Bue Brushes, designs that have been nominated in the homeware category of the Dezeen Awards include a confetti-patterned rug made from yarn offcuts and a porcelain tableware collection that wears its blue glaze layered internally rather than on the outside.

Until Monday 12 October, Dezeen readers can vote for their favourite projects from the Dezeen Awards shortlist via our new public vote portal.

Photography is by Kathrine Hovind unless otherwise stated.