Built in the city of Gallarate in Lombardy, the development consists of two housing blocks clad in travertine – a type of limestone – that contain 20 apartments in total.

The development near the city centre stands between two roads, with its main facade on the busy Via Roma and a smaller entrance on the much quieter Via Postporta.

Álvaro Siza and COR Arquitectos created two four-storey blocks that face each other with a communal walkway between them.

The larger of the two blocks is located away from the main road surrounded by existing buildings and is shaped like C to partially enclose a small area of grass.

On the other side of the site, the smaller block was designed to stand alone from the development like a villa and has a largely plain travertine-clad facade facing the road with numerous windows on its inward facade.

Both blocks were built above a two-storey car park, which occupies the entire site and is accessed from Via Roma. 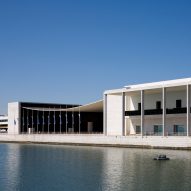 Along two sides of the development, a public pathway has been created as a route between the main road and the city centre.

Alongside the blocks, the architecture studios have created a series of gardens and spaces enclosed by travertine walls.

The limestone material was also used to create entrance gates and seating within the gardens.

Portuguese architect Siza won the Pritzker Prize in 1992. In a recent interview with Dezeen, he explained how he created the swooped concrete roof of the pavilion he designed for the 1998 Expo in Lisbon.

Recent projects by the architect include a ceramics pavilion with a thatched roof at the Casa Wabi artist retreat in Mexico and the red sandstone International Design Museum of China.