This distinctive geometry was developed by Steven Holl Architects in response to the roots and driplines of these trees, which are one of the oldest elements of the campus.

"Winter Visual Arts Building is the center of creative life on campus," said the New York studio. "The universal language of art enabled by the building's spaces brings together students from diverse cultures to collaborate on arts projects."

"The large diameter trees, the oldest elements of the Franklin & Marshall's 52-acre arboretum campus, were the conceptual generator of the building's geometry," it continued.

"As a lightweight building, its main floor is lifted into the trees on a porous ground level open to the campus."

Winter Visual Arts Building's form was achieved with a two-story 'box-kite' steel frame, which is elevated and cantilevered from its white-painted concrete base.

The facade's translucent glazing was chosen by the studio to provide optimal lighting conditions for the studio spaces inside, and is combined with operable viewing windows and skylights to provide fresh air.

This glazing is also intended to contrast with the "heavy exemplary brick architecture" of the adjacent Old Main – an original 1850s campus building to which it is connected to via a ramp.

Inside, the Winter Visual Arts Building has been designed with generous circulation spaces, with two entrances on different levels.

The ground floor contains studios for heavy sculpture work alongside a series of galleries that make the facility and student's work accessible to the local community.

Above, the first floor contains more private, double-height studios for drawing, design, printmaking, painting, woodworking and an auditorium for cinematography students, which are arranged around an informal presentation space.

A mezzanine-style second floor overlooks the teaching studios and hosts Art History seminar rooms, while a hidden basement level contains all of the digital labs and service areas that require minimal lighting. 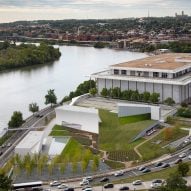 The Winter Visual Arts Building is complete with a large reflecting pool outside, which has been placed to reflect the translucent glass facade at night.

Steven Holl Architects is the eponymous firm of American architect Steven Holl, founded in 1976. Today it has offices in New York and Beijing and is headed up by Holl with partners Chris McVoy, Roberto Bannura and Noah Yaffe.

It also recently won a competition to revamp Ireland's largest university with a proposal featuring buildings that evoke the Giant's Causeway.