A coffee factory and offices in Tbilisi, Georgia, has been built in a geometric concrete shell topped by a green roof by local studio Giorgi Khmaladze Architects.

Called Coffee Production Plant, the project is located on a strip of land close to the Georgian capital's airport. The building has been shortlisted for business building of the year at Dezeen Awards 2020.

The L-shaped building is framed by concrete walls shaped to appear as though they have been folded, concertina-style, to create angular edges.

"Its appearance changes during the course of a day, following sun movement producing an interplay of light and shadows."

Giorgi Khmaladze Architects poured the concrete in situ, choosing the material for its durability as well as its aesthetic qualities.

The roof undulates, deliberately high where the factory machinery requires the space, but lower in other places to create an interesting shape, both inside and out.

Planted with wild grass, the green roof is accessible to staff at the coffee factory via two roof terrace access points. It also doubles as insulation for the building.

The exterior concrete walls are double-layered, with insulation sandwiched in the middle.

At the front, the concrete facade raises to frame an entrance portal leading to the main lobby. Concrete walls and amphitheatre-style steps converge in the atrium, which contains a front desk.

Angled glazed walls framing two planted courtyards at the centre of a pair of lightwells allow natural light to penetrate the space.

Ferns and mosses are planted in indoor beds between steps. A contemporary chandelier of pendant lamps and a chair swing hangs from the ceiling. 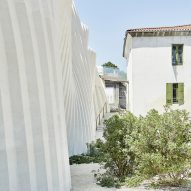 The multiple layers of concrete platforms in the atrium can be used by visitors as a waiting area and for hosting exhibits about coffee.

Ramping walkways lead up to a cafe and to staff offices and meeting rooms. Three planted lightwells spaced across the office block bring light and greenery into the concrete-walled interiors of the work- and meeting spaces.

Gantry-style stairways made of black perforated metal add to the industrial aesthetic.

Giorgi Khmaladze Architects was founded by Giorgi Khmaladze in Tbilisi. The practice has designed a faceted facade for another project, a fuel station and McDonalds in Batumi made of glass instead of concrete.

More interesting factory architecture includes a wooden tofu factory in China, and a mustard and pickle factory in Belgium designed to look like a religious building.