The ascetic lifestyles and diets of Korean Buddhist monks influenced the interiors that Limtaehee Design Studio has created for DooSooGoBang restaurant in the city of Suwon, South Korea.

DooSooGoBang, which is shortlisted in the restaurant interior category of this year's Dezeen Awards, is located east of Suwon in the district of Yeongtong-gu and serves Korean temple food.

The cuisine originated 1,700 years ago in Korea's early Buddhist temples and sees organic, seasonal meals prepared without the use of onions, garlic, chives, leeks and spring onions.

Monks and nuns typically avoid these five ingredients as they're said to disrupt harmonious spiritual practice, instead relying on elements such as mushroom powders and fermented soybean pastes for flavour.

These practices came to be a key point of reference for Limtaehee Design Studio, which wanted the interiors of the restaurant to evoke the same "humbleness" as a Korean Buddhist temple and the dishes developed there.

The restaurant has been divided into three areas – the first is a spacious hall-style room which will act as the main dining room, finished with black-tile flooring and walls washed with pale grey plaster. 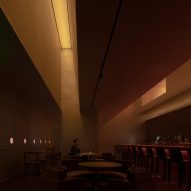 Towards the rear of the room is a platform where diners can eat seated on floor cushions, in traditional Korean style. Additional bench seats and wooden dining tables have also been scattered throughout the room.

Wooden shutters lead through to the restaurant's second area, which is meant to have a more intimate ambience.

"Contrary to a rather public image of the main hall, this area offers a feeling that you are away from the city and meditating in a temple in the mountains," explained the studio.

The focal point of the room is the timber-inlaid dining table, which has a stream of water trickling down from its side into a rough stone bowl that sits on the floor.

Diners must take off their shoes before entering the third area of the restaurant, which has been entirely lined in white hanji – a type of Korean paper handmade from the inner bark of a mulberry tree.

Limtaehee Design Studio likens this area to a sarangbang, a room in a traditional Korean home sometimes used for leisure activities or to entertain visitors.

"We prepared this room imagining [head chef] Jung Kwan sharing conversation with guests, or relaxing herself," the studio added.

Limtaehee Design Studio is based in Seoul. Its DooSooGoBang project will compete in this year's Dezeen Awards against projects such as Tori Tori by Esware Studio, an eatery in Mexico that takes design cues from the armour of a samurai warrior.

Also in the running is Voisin Organique by Various Associates, a restaurant in China with shadowy rooms and soaring ceilings intended to make diners feel like they're wandering through a mountain valley.