Tampons, matches and charging ports protrude from integrated openings in these Netina shoes, which Netha Goldberg designed to allow wearers to "assist while on the go".

The knitted Netina shoe collection is comprised of three designs, each providing a different use. One pair of shoes contains matches, another holds tampons of varied sizes and the third offers electrical ports to charge a number of devices.

Israeli designer Goldberg chose objects that are a part of people's daily lives, and that are regularly lent to and shared with other people, like when a smoker asks someone for a light.

The designer explained that having these items to offer to others who need them encourages positive physical interaction, something that she believes our society does not experience enough and often actively avoids.

"The human body contains various opportunities for carrying objects that can be useful for ourselves and to those around us," said Goldberg. "Our feet contain such benefits and also obtain the true characteristic of movement."

"Movement as in being dynamic and active, but also movement that symbolises the transfer and giving of an object to another," she continued. "I started researching what people like to give and to receive while are on the go and paid attention to the matter of weight and size."

"The project examines the field of cooperating in an unconventional way and provides answers to the sincere desire to give and receive as part of a creative, mutual and open society."

The white shoe design is covered in spikes with holes in their centres that can be used to hold matches. "These represent the element of fire – an element we have been transferring to one another since the beginning of time," added Goldberg.

The red shoe features tubular openings that can be used to contain different sized tampons, which are typically hidden away in a purse or bag.

USB charging ports line the outer edge of the blue shoe, to allow people to charge their devices on the go using a portable charger inside the sole.

The battery can be recharged via a plug at the back of the shoe, and a charging cable can also be looped around the shoe.

Goldberg wanted each of the objects to be visible in "an extroverted manner" on top of the shoe, and for the shoe to be able to carry a generous amount of the chosen item.

A barcode is printed on the back of each conceptual shoe design that would link to a social app, allowing people to connect with each other by scanning the shoe.

"In general, my point of view about our goal as designers is to give a thread tip that will motivate, educate and lead to action," said the designer. "It is not the only objective and role, but it is certainly an important one – one that led me to create the Netina project." 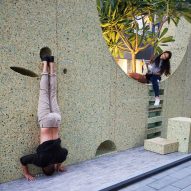 Other projects designed to encourage social interaction include the WAL(L)TZ installation by Beirut studio T Sakhi, which comprises a wall made from recyclable foam that features various openings and cracks that visitors can use to communicate with one another.

Architecture firm Snøhetta also built a smile-shaped aluminium bench at the United Nations Headquarters in New York, which was inspired by Nelson Mandela's historic quote: "The best weapon is to sit down and talk".

Photography is by Ori Shifrin Anavi.