Daniel Libeskind's New York firm is designing a mixed-use development for a town in New Jersey that hugs the Delaware River.

Studio Libeskind will complete the waterfront neighbourhood in the town of Phillipsburg.

Covering a site of seven acres (2.8 hectares), it is intended to act as a cultural gateway that also links the surrounding towns to the Delaware River, which runs through New Jersey, Delaware, New York and Pennsylvania.

"We are looking forward to this opportunity to revitalise the riverfront and invest in Phillipsburg's most precious natural assets," said Daniel Libeskind.

"Our proposal focuses on highlighting the natural beauty of town by enlivening the public realm and creating signature architecture that is both contextual and innovative."

Drawings of the mixed-use development show it will include a series of structures along the river. These buildings will be residences with rooftop gardens, parking and commercial space, connected by elevated footbridges.

A promenade will run along the waterfront side of the development and step down to a boat launch on the water.

Studio Libeskind was awarded the project with local developer Stateliner United after responding to a request for proposals from the township of Phillipsburg.

Stateliner United claims the development will provide a huge boost for the small New Jersey town. 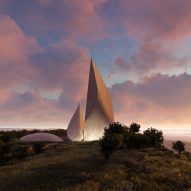 Polish-American architect Libeskind founded his eponymous firm with his partner Nina Libeskind in Berlin, Germany, in 1989 after winning the competition to build the Jewish Museum Berlin.

In 2003, the studio was chosen to masterplan the World Trade Center redevelopment following 9/11 and moved its headquarters to New York.

Recent projects by the firm include a museum in Kenya's Rift Valley that will track human evolution in the landscape and an angular archeology museum for northern Chile.