Located in a historic palazzo in the Porta Venezia neighbourhood in Milan, the centre centres around an orange staircase inserted into a 15-metre-high stairwell that doubles as a performance and meeting space.

Carlo Ratti Associati said the project explores "the meaning of physical space in a digital world".

"We have used architecture to produce serendipity and new weak social ties, which rarely happen in the digital world," said the studio. "This results in the hybridization of different kinds of spaces, as we have seen happening during the pandemic."

"For instance, the central stairwell also becomes a theatre, a café and a working/meeting space."

The design was informed by an earlier renovation of the space carried out by Milanese designer Gae Aulenti at the end of the 20th century.

"We started from Aulenti's intuition to create a new staircase in the middle of the building but redesigned it to turn it into a 15-metre-high vertical plaza," Ratti told Dezeen as he shared exclusive photos of the project.

"The plaza should become the backdrop for informal presentations and everyday casual encounters. Furthermore, it fulfils a more traditional function to connect all the spaces of the MEET centre across five or six different levels."

Carlo Ratti Associati, together with architect Italo Rota, renovated the 1,500-square-metre (16,000-square-feet) space across three levels. As well as the plaza the centre, which is now open to the public, has a reconfigurable auditorium and movie theatre, a cafe and an immersive hall for digital installations.

Ratti began working on the project a couple of years ago, before the coronavirus pandemic struck, and believes the brief – which focused on the meaning of physical space in a digitised world – is even more important today.

"From the onset, the client asked us: MEET could be a totally digital platform, so what should be the role of physical space?" Ratti said.

After discussions with the MEET leadership, Rota, and other architects, sociologists, and philosophers, Ratti says they came to the conclusion that physical spaces can function as an antidote to the homophily – the tendency for people to be drawn to those who are similar to themselves – of the digital world.

"The internet encourages us to algorithmically filter out individuals and ideas that challenge our comfort zone, trapping us within ideological echo chambers that are worsening polarisation," Ratti said.

"The physical space of MEET should counter all of the above. It should maximise serendipitous encounters, which can lead to creativity and knowledge-sharing."

It was to fulfil this vision that the studio created the central, vertical plaza, which features a vibrant resin-coated steel staircase. Ratti aimed to innovate on the material fabrication process by using digital tools. 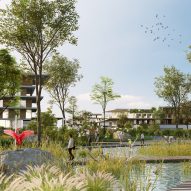 "The stairwell was digitally fabricated using an innovative laser-cut steel sandwich we developed – which allows it to cover significant spans with an extremely thin section," he explained.

The stairwell features asymmetric landings and moves in a zig-zag fashion to encourage spontaneous meet-ups.

It was also designed as a backdrop for multimedia projections, to help the digital centre's aim of marrying the physical and digital.

A number of projection systems and screens are scattered across the building so that people can access the MEET's digital archives in unexpected ways, while still enjoying physical interaction with other people.

"Since we were forced into widespread lockdowns, we have adopted a new way to live and work in which almost everything is done virtually," Ratti said.

"But such a lifestyle narrows our social circle. The internet seems to be weak at nurturing what sociologist Mark Granovetter calls 'weak ties' – relationships with people exogenous to our tightly-knit social circles – which are crucial for the strength of our social circles."

According to Ratti, physical spaces can function as a much-needed way of strengthening social ties.

"Physical space is an antidote to such an effect," he said.

"I think that as designers we are all called to imagine a new, post-pandemic 'networked specificity' – an approach to architecture able to forge new serendipitous connections amongst people and to counter the fault lines of digital communities. "

Ratti has previously designed multiple pandemic-related projects, including an intensive care unit made from a shipping container that was installed at a Turin hospital and a battery-powered wardrobe purifier that sanitises clothes.

In a live interview for Dezeen's Virtual Design Festival, the architect said "dinosaur" hospitals and universities need to be redesigned for the post-coronavirus era.

Photography is by Michele Nastasi unless otherwise stated.