A 10-metre-tall ficus tree grows through the centre of the living space in The Greenery, a farmhouse renovation and extension by studio Carlo Ratti Associati and architect Italo Rota in Italy.

Located in the countryside outside Parma, the home was designed by Carlo Ratti Associati (CRA) and Italo Rota for Francesco Mutti, the CEO of tomato company Mutti.

Having already won an international competition in 2017 to redesign the Mutti factory, the architects were invited to design the CEO's "forever home" in a nearby farmhouse and granary.

Named The Greenery – a combination of the words green and granary – the house is intended to "blur the boundaries between the natural and artificial". This led to the large ficus tree, named Alma, being installed in the farmhouse's new open-plan living space and kitchen.

"The 2oth-century Italian architect Carlo Scarpa once said, 'between a tree and a house, choose the tree'," explained CRA founder Carlo Ratti.

"While I resonate with his sentiment, I think we can go a step further and put the two together," he continued. "The tree stands in a new weathered steel-topped extension that abuts the original farmhouse, sunk slightly into the ground and featuring a fully-glazed, south-facing wall and skylights."

Inside the living space, a weathered steel staircase leads around the tree to a series of landings above, which are enclosed by screens that create a play of light and views.

Windows covered by perforated brick walls on either side of this room create a dappled pattern of light and shadow similar to that of the tree.

"By doing so, it mingles with the architectural details of the house, and leaves subtle shades all around it."

The landings above The Greenery's kitchen and living room lead to the bedrooms, which are lined with thinner, elongated openings and windows to provide more privacy.

At the end of the farmhouse building, there is secondary living space, which opens up to the landscape with a fully-glazed south-facing wall, shielded from the sun by large shutters. 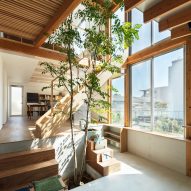 Opposite the farmhouse to the north is a workspace housed in the old granary. It features similar weathered steel detailing and has an elasticated net-like floor that functions as a hammock for lounging and reading.

The architects' aim of incorporating nature into the design is also reflected in some of the project's material choices, including the resin flooring that incorporates soil and orange peels.

A weathered steel canopy on brick pillars runs along the edge of the granary, creating an outdoor gathering and creating a sense of continuity between the two buildings.

The landscaping surrounding the two structures was designed by Paolo Pejrone and Alberto Fusari and celebrates the biodiversity of the area.

CRA also recently collaborated Rota on the design of the Italy Pavilion at Dubai Expo 2020.

Completed with Matteo Gatto and F&M Ingegneria, the structure was topped by a roof of three upturned boats from which hangs a rope curtain facade.

The photography is by Delfino Sisto Legnani and Alessandro Saletta from DSL Studio.