Designers Giorgio Gasco and Gianmaria Della Ratta have created a range of decorative stucco mouldings based on the interior decor of rented chat rooms used by cam girls.

The Digital Muses collection consists of eight plaster wall pieces featuring elements such as cherubs, dolphins and vibrators, which the designers spotted in chat rooms used by cam girls who put on live sex shows via video streaming in exchange for money.

The collection, which is based on research and interviews with cam girls, was presented at Rotterdam's Galerie Lecq and as part of this year's virtual edition of Dutch Design Week (DDW).

The designers, who both graduated from Design Academy Eindhoven, spoke about the collection during a Dezeen panel discussion exploring how the coronavirus pandemic has impacted intimacy.

"Physical spaces have been affected a lot by the coronavirus crisis but on the contrary, the virtual space has been amplified and strengthened," Della Ratta said in the talk.

"So digital media is now part of our daily lives and especially in this situation, we cannot live or work without it. So as designers, we felt the need to investigate this universe, to understand it and to use it for design purposes."

The number of people turning to cam girls has risen during the pandemic, with one performer reporting a 30 per cent increase in business and streaming site CamSoda doubling its viewers.

Through Digital Muses, Gasco and Della Ratta discovered that set design is a key component of cam girls' work. 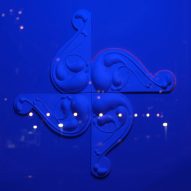 "This one girl, in particular, told me that she tries to dress according to the room [she is in]," Gasco said during the panel talk. She went on to describe matching her outfit to her backdrop as an "essential part of the job" because it has a noticeable effect on the spectator.

As a result, an entire industry has sprung up to help cam girls set the right mood, with YouTube channels dedicated to tutorials on how to achieve the right lighting and scenography. There are also so-called cam studios available to rent, which come equipped with a range of different backdrops and professional streaming technology.

Gasco and Della Ratta identified a distinct visual language in these backdrops, consolidating elements of technology such as bright, electroluminescent (EL) wires and keyboards with the tactility of cushions and blankets and soft, feminine colours like baby blue, pink and purple.

"It's very interesting how they create their own identity," said Gasco.

"Our goal is to elevate this aesthetic universe of digital content because we see a big artistic value in these scenarios. We then try to extrapolate some symbols, we extrapolate the language, even the dress code that they are using and try to adapt it into a design piece."

In a playful inversion of how our real lives have become mediated by webcams during the pandemic, the duo took this design aesthetic that was developed for the virtual world and transplanted it into real, tangible objects.

To do this they relied on traditional plaster reliefs, which have been used since antiquity to immortalise symbols and entire scenes within architecture.

"Stucco is very decorative but also a narrative element and we wanted to use this powerful aesthetic and narrative in combination with the cam girl world, which questions the concept of intimacy and sexuality," said Della Ratta.

"So our stucco pieces are not only decorative or furnishing pieces but also pieces of storytelling, of this digital movement that [has its own] symbols, messages and stories."

Traditionally cast in plaster and marble powder, the stucco is shaped to suggest different sex toys such as a ball gag, which is integrated into a circular mandala.

Yet other pieces in the collection draw on more cutesy, girlish iconography from cheeky cherubs to rainbows and dolphins, in a bid to move away from overly stereotyped, singular representations of sex workers.

Similarly, cam girls' use of tactile fabrics is picked up in a piece called Furry20, which mirrors the fur blankets and pillow they often rely on to soften a space and nods to the wigs they use for cosplay sessions.

Each of the all-white reliefs is also adorned with a wire that is coated in an electroluminescent phosphor coating, which, as the name suggests, emits a soft glow when it is connected to power.

These EL wires are widely used by gaming streamers who use them to pimp their computers, but they have also become popular among cam girls as an extremely online way to add ambient lighting to their backdrops.

The live panel discussion was part of a series of talks streamed as part of this year's Dezeen x DDW collaboration.

In their talk, Gasco and Ratta discussed the intimacy of workplaces with Sabine Marcelis and Li Edelkoort while other talks focused on privacy and data as well as our relationship with nature and the products we use day to day.