Demolition has begun on a wall in Piccadilly Gardens, Manchester, which forms part of Japanese architect Tadao Ando's only building in the UK.

Removal of the six-metre-long concrete wall, which locals have dubbed the Berlin Wall, began on 16 November and is expected to be completed this week.

The freestanding wall was built as part of a concrete pavilion designed by Pritzker Prize-winning architect Ando that was completed in 2002. It is owned by the Manchester City Council, as opposed to the main pavilion, which is privately owned.

Ando designed the pavilion and freestanding wall as part of the regeneration of the city centre.

In recent years the area has had problems with antisocial behaviour and the wall has been covered in graffiti. In 2016, more than 20,000 people signed a Manchester Evening News petition to restore Piccadilly Gardens and tear down the wall.

According to the council, demolishing the wall is the first step in a transformation plan that aims to make it easier to see across and move through Piccadilly Gardens. It cited poor sightlines as a contributory factor to the antisocial behaviour.

The main part of Ando's building, a 130-metre-long curved concrete pavilion housing a cafe, will not be demolished as part of the current works.

However, the council has wider plans to transform the area as part of an overall regeneration scheme, which could impact the pavilion.

"The scheme also intends to address improvements to the pavilion building, which includes the other part of the wall," the council stated. "What form these improvements take is to be determined."

The pavilion has been at risk of destruction before – a planned £10 million overhaul by property owners Legal & General would have seen it torn down and replaced with restaurants and a coffee shop designed by Urban Edge Architecture.

That scheme was abandoned when it became financially unviable.

Plants could be used to "soften" remainder of Ando design

The council wants to add more planting and improve Piccadilly Gardens' lighting and design, as well as use plants to "soften" the remaining Ando wall.

"There is also an aspiration to soften the appearance of the pavilion's concrete wall, transforming it into a green 'living wall' and by removing the free-standing part of the wall which, unlike the pavilion itself, is owned by the council," the council said. 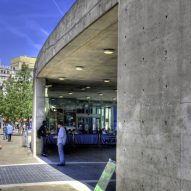 Recent graffiti on the wall, which was created in response to the coronavirus lockdown and stated "the north is not a petri dish" could be preserved, as councillor Pat Karney said it has "historic importance." He welcomed the destruction of the wall itself.

"This is the news that everybody in Manchester has been waiting for – part of the wall is coming down," Karney, who is the city centre spokesperson, said. "I'm going to mark it on my calendar."

"This is only the first part of what will be much bigger plans to make Piccadilly Gardens the vibrant and inviting space at the heart of the city which it should be."

Ando's only other design in the UK is a water feature he created with Blair Associates in London's Mayfair.

The architect recently unveiled images of his completed He Art Museum in China and designed a circular toilet surrounded by cherry trees in Tokyo.