Japanese engineer Takeuchi Masaki has developed a wearable voice box called Syrinx, which can be strapped on like a neck brace so that people who have lost their larynx to cancer are able to produce speech.

The device is intended to revolutionise the design of a traditional electrolarynx, which resembles a small flashlight that has to be held up to the throat. The project was named Japan's national winner of this year's James Dyson Award.

Modelled on the way that vocal cords are vibrated through air from the lungs to generate sound, an electrolarynx manually vibrates the neck to create a noise that the user can then form into words using their mouth and tongue.

However, through a series of interviews with patients who have undergone a laryngectomee – or surgical removal of their voice box – Masaki found that the design for a traditional electrolarynx left much to be desired and "has not changed for 20 years".

Users complained about the fact that it was impossible to use during essential, two-handed tasks such as driving, eating or typing, while the actual voice it generates sounds unnatural and mechanical.

Tong allows users to control a computer with their tongue

"Many people said: 'I want to speak in the same voice as a healthy person'," Masaki told Dezeen.

"When used in public, the conventional electrolarynx stands out because of its robot-like sound, and people didn't want to use it except in an emergency."

Syrinx is intended to improve on this by making the device wearable, as well as changing the vibrational patterns applied to the throat.

In addition, the vibrational patterns are personalised for each user, based on recordings of their own, former voice.

This is possible by running these recordings through an artificial intelligence tool for audio signal processing known as linear predictive coding (LPC), which can analyse how a sound is created.

"It isolates the frequency characteristics of the mouth and tongue from the user's past voice," Masaki said.

"This allows us to obtain a user-specific vibration sound that can add personality to the voice created by the electrolarynx and help people speak in something more closely resembling their own voice." 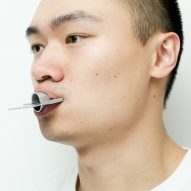 Although the team is currently still working on improving the algorithm behind the technology, Masaki has already received positive feedback from patients.

"With the latest prototype, people have said it looks cool and they can use both hands," said Masaki.

"I was very happy to receive the responses. However, there are still issues such as the noisy vibration sound and the need to adjust the position, so we will continue to develop it."

Another national winner of The James Dyson Award this year was the British startup The Tyre Collective, which has developed a wheel-mounted device that can capture microplastic emissions from tyres.

Every year, the awards also recognise an overall, international winner, which last year was Lucy Hughes and her MarinaTex bioplastic made from fish waste.