Google and design agency Aruliden have created an AI-enabled video-conferencing kit for that automatically senses the number of participants in a room and optimises sound quality and video framing for each.

The Google Meet Series One system is designed to be set up and used without requiring technicians, while the touch-free system allows attendees to join and leave meetings by voice command.

"The most important thing was this notion of creating an experience, both digital and physical, that is as close as possible to actually being in the same room," said Aruliden co-founder Johan Liden.

The system consists of a family of six products. Liden said the components share " a very reductive design language" that eliminates clutter and results in a system that can be set up and used by people without technical expertise.

"It's very easy to just pile on features and pile on buttons and make things a little bit too complicated," said Liden, whose company has offices in New York, Amsterdam and San Francisco.

"We wanted to make sure that that seamlessness and that simplicity is true from how you install it to how you use it," he added.

"I'm sure you've been in many conferences where they have to call the IT folks to get it up and running. Those are obviously the hurdles that we wanted to avoid."

The expandable kit consists of a soundbar, a 4K camera and microphone pods connected to a hub via ethernet cables that also provide power to the components to minimise cabling. The system, which plugs into any TV screen, can be controlled either via remote control or by a touch-control tablet.

The components, which are available in charcoal grey or chalk white, follow the look and feel of other Google hardware products such as the Google Nest devices for the home.

Each element has rounded corners and a matt finish, with textured fabric used on the soundbar and microphones.

TJ Varghese, group product manager at Google Workspace Hardware, claimed the Google Meet Series One is the first video-conferencing system where every component has been designed holistically rather than assembled from disparate products.

"If you look at what was launched prior to Series One, it was taking off-the-shelf components that were not necessarily designed to be put together. Whereas Series One really brought in that unification."

With video-conferencing becoming increasingly important due to the coronavirus pandemic, Varghese said that companies were looking for simpler, better-looking solutions.

"They spend a lot of time thinking about what furniture they're buying, what televisions and all of the lighting that goes into it. We had a lot of strong feedback saying that the products that we were selling functioned well but they were not looking great."

Liden and Varghese, who previously worked together on a digital whiteboard called Google Jamboard, started developing the video-conferencing product before the coronavirus pandemic caused a huge upswing in remote working around the world.

Varghese said that the experience of conducting video calls from home has led business leaders to demand the same seamless experience in the office.

"The consumerisation of technology has outpaced what is in the workplace," he said.

"We took photographs of conference rooms and all the cables and wires and just random stuff everywhere. We would have CEOs of large companies say, 'hey, why can't my conference room work like it does at home? Why can't it look as good?'"

Accordingly, the Google Meet Series One system has just one power cable "because that's what they're used to at home".

The new system, launched in partnership with Lenovo, includes Google's TrueVoice technology that cancels unwanted noise such as typing and snacking while amplifying voices.

The system's hub, called the Meet Compute System, attaches magnetically to its wall bracket so it can be removed easily from behind the TV without having to call the IT department. 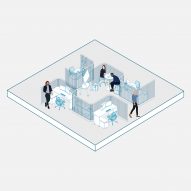 The 4K cameras include digital PTZ (pan, tilt, zoom) capabilities and use AI to automatically frame participants so they are optimally centred and scaled.

"This system is really trying to make sure that no matter where you are, whether you're in the conference room or somewhere else, you can read micro-expressions as you would if you were in the room itself and get richer dialogue and collaboration," said Liden.