Technology company Google has released the Google Pixel Watch, which is its first smartwatch, has a sleek circular face and includes a Fitbit activity tracker.

The Google Pixel Watch is the latest edition to the company's Google Pixel collection of digital devices, which includes smartphones, laptops and tablets.

Comprised of a bulbous dome-shaped glass watch face mounted on a recycled stainless steel case, the smartwatch comes in colours including silver, charcoal and matte black.

The watch face can be attached to 20 different bands in a wide range of colours and materials such as leather or woven designs. It also includes 19 customisable interfaces.

"The unique band attach mechanism [is] inspired by how a camera lens attaches to a camera body," said Google.

Designed to be both informative and encourage exercise, the Google Pixel Watch is equipped with a Fitbit activity tracker. Fitbit was acquired by Google's parent company Alphabet in 2021.

"The watch combines the smarts and helpfulness you know and love from Google with Fitbit's health and fitness expertise, all in an elegant design," said the technology giant. 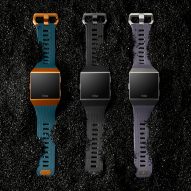 Google Assistant, the company's virtual assistant AI software, is among the features built into the watch in order to provide users with information.

Created to be worn during both the day and night, the Google Pixel Watch is water- and scratch-resistant, according to the technology company.

While the smartwatch is yet to be released, Google has begun taking preorders.

Other smartwatch designs include a band by Sony that users can attach their own analogue watches.

Recently, Google turned the logo on its homepage black to coincide with the funeral of Queen Elizabeth II while in June, it was reported that the company was in negotiations to buy the James R Thompson Center in Chicago to use as its headquarters in the city.

The images are courtesy of Google.