Architecture studio Atelier-r has added a series of Corten steel bridges and platforms to provide tourist access to the ruins of Helfštýn castle in the east of the Czech Republic.

The studio carried out the major renovation of the visitor attraction, which is the second-largest castle complex in the Czech Republic after its deteriorating state had forced parts of the building to be closed to the public.

The majority of work was carried out on the castle's keep, which its owners and Czech Republic's national heritage institute wanted to be preserved as a ruin.

Atelier-r created a series of glass roofs that sit below the original walls so they can not be seen from outside the building to enclose some of the rooms.

"Our team strived to complement the historical building with the contemporary architecture that would fit the purpose and focus on both practical use as well as gaining an aesthetic appeal," said Atelier-r's principal architect Miroslav Pospíšil.

"We aspired to go beyond the core task of creating a suitable roof solution because we wanted to involve the visitors in the historical development of the palace," Pospíšil told Dezeen.

"This intention sparked a great idea of incorporating the contemporary architectural elements into the historical building and connecting the existing ground floor with the newly accessible higher levels of the palace."

Along with the new roofs, the studio added various stairs, bridges and platforms, all made from Corten steel, to create a visitor route through the ruins.

The weathering steel elements allow visitors to see the upper levels of the castle that were previously inaccessible, with bridges passing through rooms and passages built alongside the battlements.

Atelier-r chose to use the orange Corten steel so that the additions made to the ruin would be clearly identifiable.

"We believe that easily readable architecture is honest and that is important for us," said Pospíšil. "Therefore, we wanted to acknowledge and accentuate the contrast between the historical building and modern elements."

"Our concept draws from the respect towards the historical building and it pursues a major effort to preserve the castle's authentic character," Pospíšil continued. 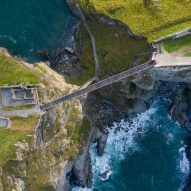 "New contemporary elements do not compete with the historical building, rather they create a cohesive unit in which all the elements, old and new go hand in hand."

The studio also believes that Cortenl was an appropriate material due to the castle's history of ironworking and the way it weathers over time.

"It was crucial to choose a material that would be timeless," explained Pospíšil. "Corten is a special alloy that undergoes corrosion, matures and matches the texture of the old historical walls.

"Moreover, Helfštýn Castle is well-renowned for its iron craftsmanship tradition, therefore it made a perfect sense to choose Corten to work with."

Overall the studio hopes that the project will allow visitors to gain a greater understanding and appreciation of the historic castle that dates back to the 13th century.

"The renovation created an attractive sightseeing route that brings the public closer to the construction details of the original palace than ever before," said the studio.

"Standing on the modern bridges, looking up the walls, you can feel the legacy of the sight as well as understand the purpose of the modern architecture within it."

Previously William Matthews Associates and engineers Ney & Partners added a bridge to the ruins of Tintagel Castle in Cornwall, UK, while Max Dudler created a restaurant inside Heidelberg Castle in Germany.