Chinese electronics company OPPO has revealed a concept smartphone, called the X 2021, which expands by rolling out its screen on a miniature conveyor belt.

Companies from Samsung to Motorola, Microsoft and Huawei have tried to achieve a similar size-changing effect through the much-hyped novelty of folding screens.

But the OLED screen in the X 2021 simply unfurls like a scroll, growing from 17 centimetres to 18.7 centimetres at the slide of a button.

This is possible through a trio of technological innovations, centred around the roll-out mechanism.

The flexible OLED screen is laminated onto a steel "warp track", which resembles a conveyor belt or the tracks of a tank, allowing it to be rolled out when needed while strengthening it and maintaining its shape.

A "two-in-one plate" makes up the body of the phone, which essentially consists of comb-like units that are interlaced to form a single surface behind the screen.

When moving into tablet mode, these are cleaved apart to accommodate the display's expansion, while always leaving a certain number of "teeth" supporting the centre of the display to prevent it from collapsing inward.

This process is powered through two "roll motor powertrains" that allow the display to retract and extend smoothly.

"Two drive motors built into the handset generate a constant force output that is used to retract and extend the display," an OPPO representative told Dezeen.

"This design ensures that, as the display moves, stress is equally distributed. Even a sudden pull or push will not damage the display."

Thanks to a series of high precision sensors, the images on the screen are able to automatically adapt to the width of the display as it expands.

The display itself is "infinitely variable", meaning it can be set to any number of desired sizes for gaming or reading ebooks, as long as they fall within the device's specs.

"Compared with the fixed screen size of a folding screen, the on-the-go adjustment of the rollable screen promises endless possibilities and can even enhance office productivity and entertainment experiences," said OPPO. 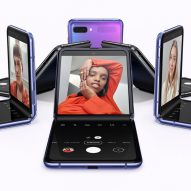 "The phone automatically adjusts to full-screen viewing according to the size of the video, providing a more comfortable reading experience that's close to the size of a book and it can display a full, text message pop-up window while playing games without affecting the game screen."

Although the x 2021 was presented at OPPO's Inno Day, the company has stated that there are no immediate plans to make it commercially available.

Previously, fellow Chinese electronics company TCL has proposed a similar concept, although it has not yet created a functioning product.

LG has already integrated rolling screen technology into the OLED R TV, which can be retracted into its base when not in use.

All images are courtesy of OPPO.