Dezeen promotion: Vola's brushed-gold products feature in a short film by the Danish tap manufacturer, which is set across coastal summerhouses tucked away in the sand dunes of a beach in Skagen, Denmark.

The short film, titled The Danish Sommerhus – Inspiring Life, aims to demonstrate how compact spaces can be used efficiently and stylistically.

Simple, minimal design is one of the best ways to make the most of space, which is a key feature of Vola's KV1 and HV1E taps that can be seen in the film.

In the film, Lasse Andersson, creative director of the Utzon Centre, explains how the summerhouse has become a significant aspect of Danish life.

"Lasse Andersson states that the Danish summerhouse is more than just a holiday home," said Vola. "It is a place where memories are created, where generations get together to relax, reset and gain perspective on the wider world. "

"Its atmospheric essence is defined by its proximity to nature and water. It is nothing to do with status or wealth but all about the celebration of tradition, the memories collected and the way that the limited space encourages a re-evaluation of life."

"Sustainability has always been ingrained in the Danish DNA," Vola continued. "The concept of the summerhouse perfectly demonstrates intelligent design within small spaces, conscious consumption and valuing the simple things in life." 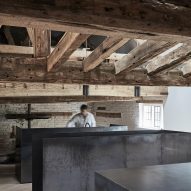 "It showcases the Danish love of sustainably sourced, long-lasting natural materials, as well as a tradition of pure design and craft techniques that go back centuries, including carpentry, masonry and thatching."

"This connection to nature combined with the meditative atmosphere is central to the summerhouse culture in Denmark, continually evoking new sensations and inspiration," added Vola.

While the film features several summerhouses, it focuses on one in particular, located in Skagen. The coastal home was designed by ARDESS Arkitektur and is tucked away among sand dunes, reeds and grass.

The sandy hues of the house's surroundings are complemented by the warm tones of Vola's brushed-gold tap finish featured inside, which is one of 27 colours available and is part of the brand's Exclusive Colour series.

The film is the latest in a series of short films by Vola that focus on the role of design in Danish culture.

Other films in the series include one with architecture practice McLaren Excell, in which two of the studio's co-directors discuss the importance of preserving a home's history during restoration, and another with designer Isle Crawford, where she explores the impact of design on wellbeing.

This article was written by Dezeen for Vola as part of a partnership. Find out more about Dezeen partnership content here.