A narrow site in Ljubljana has become home to The Double Brick House, a pair of matching family residences designed by Slovenian office Arhitektura.

The studio, which recently changed its name from Arhitektura d.o.o, designed the two connected residences that are only six metres wide.

To work with these difficult proportions, the homes have been arranged with one in front of the other. One has its entrance on the front, while the other one is tucked around the side.

The architectural approach was to make the two properties appear as a single structure, united by dark grey-brown brickwork and larch wood window frames and door reveals.

Because both homes have a two-tiered roof, this gives the building an unusual profile outline.

"Visually, the building is conceived as a monolith, a materially uniform cube, which is sculpturally modified according to the sculptural principle of subtraction," explained Arhitektura, which is led by architects Peter, Boštjan and Aleš Gabrijelčič.

"The facade cladding made of dark brown bricks gives the house its desired uniformity of materiality and corporeality."

The Double Brick House is located in Rožna Dolina, a neighbourhood that was historically very prestigious. But as a result of overdevelopment from the 1930s onwards, the quality of housing in the area has suffered significantly.

By replacing a dilapidated housing building with one of higher quality, Arhitektura hopes to set an example, showing how new developments here can look to the future without being insensitive to the past.

"A new urban matrix is emerging that will gradually outgrow the chaotic suburban tissue," said the architects. "This interim period is, however, full of paradoxes and grotesque gaps between the old and the new."

Both homes are arranged over three storeys, with living spaces on the ground floor and bedrooms above. Their layouts are similar, although not identical.

Kitchens, dining space and living areas are grouped together, with a window wall that allows them to spill outdoors.

Three bedrooms and a family bathroom are located on the first floors, while the second floor accommodates a master bedroom suite that opens out to a roof terrace.

The landscape surrounding the properties is currently unfinished, but Arhitektura hopes that these areas can be developed at a later date, as more properties in the neighbourhood become redeveloped.

"Despite the lack of a clear spatial vision and broader strategy, the district is slowly being filled with modern facilities which will raise the quality level of both living standards and urban areas," said the architects. 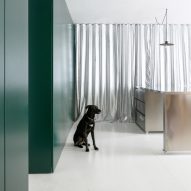 "The further arrangement of the wider spatial environment of the building will be the result of negotiations with neighbours, who may in the future follow the example, replace the dilapidated buildings and improve the general urban condition of the space," they added, suggesting improvements such as pavement repairs and new landscaping elements.