The home, which is located at the end of a row of terraced houses, is arranged around an internal courtyard and has been built on a triangular site that is enclosed by a brick wall.

As the architects explained, "the old brick wall had immense character", including a rare built-in Edwardian post box, so they chose to incorporate it into the design of the new house.

"The site 'as found' had a magical, discrete feeling away from the hustle and bustle of the street beyond," said Barefoot Architects' founder Sam Goss.

"We wanted to recreate this by building an intimate courtyard house inside the existing brick wall, and give views over the adjacent park from a roof terrace," he told Dezeen.

On the ground floor, all the rooms overlook the small entrance courtyard.

A centrally located, open-plan kitchen and dining room has sliding glass doors that open onto the outdoor space. It is flanked on either side by the living room and a ground-floor bedroom.

"The house fills almost the entire footprint of a triangular corner site within an intriguing curved wall, and we built it tightly inside of this existing historic feature, thereby generating an unusual, sculptural form," project architect Martina Goluchova told Dezeen.

"The courtyard provides the entrance space to the house, and is glazed on all sides, allowing each of the rooms to have access to natural light and ventilation, and a visual connection to one another."

Rising above the brick wall, the Corten-clad first floor contains the master bedroom and an en-suite bathroom. The rest of the house is topped with a roof terrace that has views over an adjacent park. 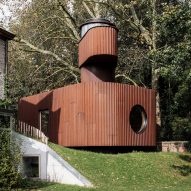 Barefoot Architects chose to clad the house in weathering steel as its orange colour relates to the wall and existing buildings in the area, while also appearing contemporary.

"Corten has an extraordinary ability to be at once sharp and contemporary, and simultaneously blend within a historic context," explained Goss.

"The deep-red colour matches the surrounding brickwork beautifully and the material itself has a pseudo-industrial quality that reflects the unique urban surroundings of St Werburghs."

Goss hopes that the project can serve as an example of how to best take advantage of a small, enclosed site.

"Be brave, be bold, and put faith in your design consultant team," he encouraged. "The project was a success because the client was prepared to back an idea with utter conviction."

"A tight site takes imagination to be able to see its constraints as opportunities for creative responses," he continued. "We made the most of existing features by overlaying a new building as part of a continuum of the site's history rather than imposing something entirely new."

Other recently completed Corten-clad houses include a Dutch row house in Amsterdam designed by Fem Architects, a cluster of gabled topped pavilions on the Nova Scotia coast and a cinematic guesthouse in Belgium.

Photography is by Anthony Coleman and Greg Pittam.