The accolade, known in English as the Spanish National Architecture Prize, was awarded to Campo Baeza by the Ministry of Transport, Mobility and the Urban Agenda, along with a prize of €60,000.

It recognises a career of impressive projects, including the sports hall at Francisco de Vitoria University, the Offices for Junta de Castilla y León in Zamora and various minimalist homes.

The award also acknowledges the architect's contribution to architectural education. Campo Baeza is professor emeritus at ETSAM, the architecture school at the Universidad Politécnica de Madrid, where he has taught for the past 50 years.

The judges paid tribute to the coherence of the architect's work throughout his career, his creative independence and his dedication to teaching the next generation of architects.

He becomes the 14th person to receive the Premio Nacional de Arquitectura since 2001, when the criteria was changed from that of an individual building to an entire career's work.

Previous winners of the prize include jury members Siza and Gallego, as well as Santiago Calatrava and Rafael Moneo.

Campo Baeza's studio has put out a statement expressing the architect's "profound gratitude" for the recognition, "which he says owes more to the generosity of the judges than to his own merits".

"He says that he is happy and can only thank God for everything," reads the statement. "And he claims that those closest to him, his collaborators and his friends, are all better than him." 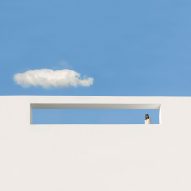 The architect is based in Cadiz, where he has lived since the age of two. He joined the architecture profession after being inspired by his grandfather, who worked as an architect in the city of Valladolid.

Campo Baeza is renowned for his pared-back style, as evident in projects such as House of the Infinite and Casa Rufo.

As well as his position at ETSAM, he has also taught at institutions including ETH Zurich, the EPFL in Lausanne and the University of Pennsylvania. He is about start a new tenure, at the New York Institute of Technology.