Rever & Drage Architects has created a tall and slim wooden house named Zieglers Nest overlooking the city of Molde and the Moldefjord on the western coast of Norway.

Set into a hillside above the city, the four-storey home was constructed with a timber frame wrapped in large beams of timber that have been dovetailed together in a manner similar to a log cabin.

"The clients wished for modern features such as large windows and a roof terrace, but at the same time employing a traditional, log construction, which uses natural materials that allow the building to breathe," explained Rever & Drage Architects co-founder Tom Auger.

The tall building's form was designed both to minimise the size of the concrete foundations and to give the house views across the city towards the fjord.

A concrete basement level, which contains a garage and five-metre-high utility space, was excavated into the hillside with three timber floors above.

"The structure is tailored to suit the high location with wide views and a steeply sloping site," Auger told Dezeen.

"In order to provide a moderate footprint, and thereby limit the use of concrete for foundations, the building was designed tall and slim," he continued.

"The location of the building towards the western end of the site preserves the neighbours' views, while also providing a warm south-facing garden, sheltered from the westerly winds."

Rever & Drage Architects envisioned the home as a group of tall wooden blocks, which have large windows and vertical timber finishing on their main facades and horizontal panels and more sober articulation on the sides. 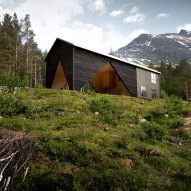 "As a decorated shed the main box is articulated as a combination of ornamented tall volumes with a heavier ornamented front and a less ornamented side," said Auger.

"Clustered together as oiled wooden objects the composition takes the form of your grandmother's load of cupboards."

Above the basement level, a floor contains two children's bedrooms, which have views of the fjord, along with a bathroom.

The main floor above this contains the double-height living room at the front of the house with a library and kitchen at the rear.

The library opens onto an outside space on the hillside, while the kitchen expands into a conservatory that faces the sheltered garden to the east.

The master bedroom suite is located on the top floor above the kitchen and library where a steep stair leads to a roof garden.

"The rooms are arranged by the view and daylight and at the same time their cleanliness or dirtiness," explained Auger. "Dirtiest rooms at the bottom and the cleanest at the top," he continued.

"House inhabitants find their natural place in this arrangement according to age, mood and time of year."

Auger reports that the homeowners are appreciating the timber home and its natural aesthetic.

"Those now living in the house report that they love the natural feeling throughout the house, with its 'wooden' ambient light, smell, tactility and airiness," he said.

Norweigan studio Rever & Drage has offices in Oslo and Flekkefjord. It previously completed a triangular, aluminium toilet on the nearby Farstadsanden beach as well as a cabin with a retractable roof and a hillside house overlooking a fjord.