Researchers from Kyoto University are developing a satellite made from wood that would burn up completely at the end of its life to reduce the amount of human-made waste floating in space.

Set to launch in 2023, the LignoSat satellite will have a shell made of timber, allowing it to burn up completely as it re-enters the earth's atmosphere.

The project is a collaboration with Japanese logging company Sumitomo Forestry and aims to tackle the growing amount of space hardware that is floating in our planet's orbit despite no longer being functional.

Alongside millions of pieces of debris, this includes more than 34,000 larger units such as discarded rocket stages and 2,550 of earth's 5,850 satellites, which are now defunct.

While they are in still orbit, these are hazards to passing spacecraft and functioning satellites.

According to Takao Doi, the former astronaut who is leading the team at Kyoto University, once the debris re-enters the atmosphere it can release small particles of alumina, also known as aluminium oxide, into the atmosphere as it burns.

"We are very concerned with the fact that all the satellites which re-enter the Earth's atmosphere burn and create tiny alumina particles which will float in the upper atmosphere for many years," Doi told the BBC. "Eventually it will affect the environment of the Earth."

Although more data needs to be gathered, researchers believe that a buildup of these particles could deplete the ozone layer surrounding our planet, which reflects ultraviolet rays away from the earth.

By making LignoSat out of wood, Sumitomo Forestry argues that the satellite would burn up completely without releasing harmful substances, making for a "cleaner and environmentally friendly" alternative.

LignoSat to be launched by 2023

Doi's team is researching how wood can be treated to withstand temperature changes, radiation and sunlight, as well as testing it in extreme environments on earth.

From there, the researchers will develop an engineering model of the satellite and finally a functioning flight model, which they are aiming to launch in 2023.

Unlike the aluminium shell of standard satellites, Sumitomo Forestry claims that a wooden version would not block out electronic waves or the Earth's magnetic field, meaning that any antennas or other devices could be stored inside of the LignoSat rather than on its exterior. 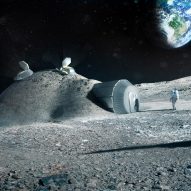 This would allow the satellite's design to be pared back to a simple box without extraneous details that might break off and further add to what NASA has labelled the "orbital space junkyard".

The LignoSat team did not share any information about how it plans to deal with the technical equipment contained in the wooden satellite once the exterior has been burned away.

The collaboration between Sumitomo Forestry and Kyoto University will also include wider research on the applications of wood as a renewable resource in space, for example to create entire habitable structures.

According to the company, the aim is to then feed this insight back into creating "ultra-strong, weather-resistant wooden buildings" on Earth.

Over recent years, architects have increasingly been exploring timber as a sustainable building material, as it has a significantly lower embodied carbon footprint than concrete or steel and actually captures CO2 from the atmosphere as it grows.

As a result, practitioners are racing to build ever-taller wooden towers, to prove that the material is viable even in large-scale applications and urban environments.

In recognition of the material's environmental credentials, the French government ruled earlier this year that by 2022 all its new public buildings must be built with 50 per cent wood.