The 16-storey Vessel viewpoint designed by Heatherwick Studio for New York's Hudson Yards development has been temporarily closed after a man reportedly committed suicide by jumping from it.

According to the New York Times, a 21-year-old man named Franklin Washington jumped from the Vessel on Monday 11 January. It marks the third death by suicide at the 46-metre-high structure since it opened in 2019.

Related Companies, the developer of Hudson Yards said it would consult with psychiatrists and other experts about implementing suicide-prevention strategies.

Washington, who was a person of interest in the murder of his mother in Texas, was pronounced dead at the scene at around 11.45am on Monday.

Three weeks earlier, on 21 December 2020, a 24-year-old woman from New York also died after jumping from the the structure. The first death at the Vessel was of a 19-year-old man from New Jersey in February 2019, before the official opening. 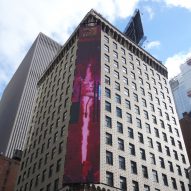 Architect killed by falling debris from building in New York

Concerns had previously been raised that the barriers at the viewpoint are not very high and easily climbable. Writing in 2016, before Vessel had completed, Audrey Wachs of the Architects Newspaper warned: "when you build high, folks will jump".

Wachs wondered why the barriers on the structure were so low when high profile architects had been forced to retroactively install barriers over high points in buildings such as New York University’s Bobst Library after tragic deaths.

"If barriers are installed, how will they affect the views, Vessel's main selling point?" she asked.

Vessel's unique honeycomb design is formed of 154 interlocking staircases that meet and divide around 80 landings that provide views of New York and the Hudson River.

Expanding as it gets higher, the viewpoint has a mile of walkways for visitors to climb and an elevator that goes straight to the top. It is clad in reflective material and visitors normally register and queue up for free timed tickets to go up it.

The building has attracted criticism over its unusual aesthetic and its role as an attraction for a privately-funded development. People complained when it came to light that Hudson Yards owned the rights to photographs taken at the Vessel.

Heatherwick Studio founder Thomas Heatherwick defended the project in a talk with Dezeen in 2019.

"It's fine to not like it," said the British designer. "But the thing that should be appreciated is the ambition of people to say 'yes' to making ideas really happen."

"I think that it's possible to suspect the worst of the intentions of a property developer," he added. "But we've been lucky to work with a few who are very well-intentioned."