Architecture studio Populous is set to reuse the fuselages from 30 Airbus A340 aircraft as sunshades for an expanded stand at football club RC Strasbourg's stadium in France.

The south stand will be enlarged to add more seats and two open areas overlooking the pitch described by the studio as "party decks".

Additional fan spaces including bars and hospitality lounges will be built within the stand centred around a glass-fronted five-storey atrium, which will be covered in louvres for shade.

In a move described by Populous as a world's first, these sunshades will be constructed from the fuselages of retired Airbus A340 aircraft.

"As part of our environmentally sustainable approach to the redevelopment, we have sought to do things in a different way: it is the first project to use upcycled aircraft parts at this scale – using 30 different aircraft fuselages," François Clément, senior principal at Populous told Dezeen.

In total, 4,000 square metres of fixed facade sunshade will be made from the Airbus A340 fuselages, which are being sourced from an aeroplane maintenance company.

The aluminium sunshades will be aligned vertically on the stand's facade to filter light entering the atrium. Each one will be 30-metres long and 2.5-metres wide and constructed from three sections taken from the top half of the aircraft's fuselage. 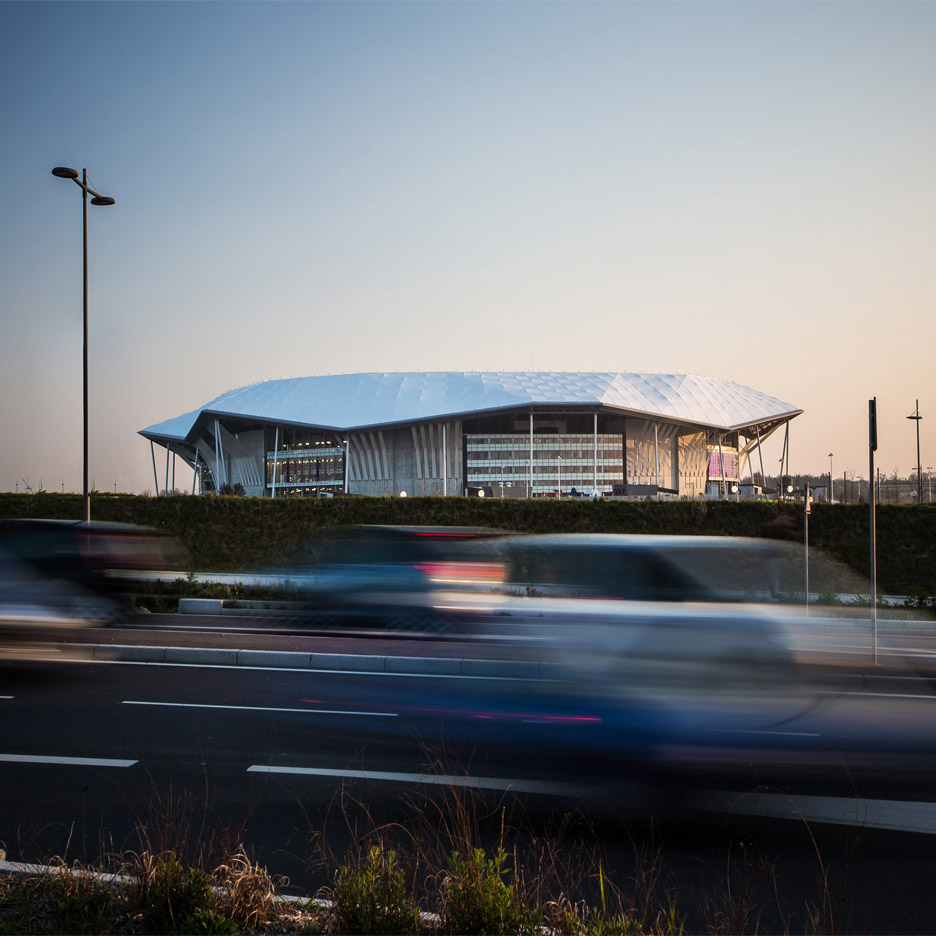 "We have always been intrigued by the massive American aircraft graveyards and the geometrical juxtaposition of all these planes," said Clément.

"There is something sculptural in their alignments and the dimension and proportion of La Meinau's south grandstand gave us the opportunity to play with the scale of these fuselages," he continued.

"Throughout the day the tilted fuselages will act as a sunshade, reducing the energy gain but letting a soft indirect light penetrate the stand."

Along with the south stand, Populous will also modernise the rest of the stadium, enclosing the concourses of the north, east and west stands to connect them and create spaces for food and drink concessions.

"Strasbourg is one of the French football strongholds and Racing club de Strasbourg Alsace would have their stadium nearly always sold out for every game, so the core idea was to maintain the atmosphere while providing better facilities without increasing the ticket price for fans," added Clément.

Work is set to start on the renovation of RC Strasbourg's stadium in May 2022 and be completed by July 2025.

Stadium architect Populous has designed numerous sports facilities in countries all around the world. It designed the stadium for fellow top-tier French football team Olympique Lyonnais and has created the masterplan for Paris 2024 Olympic Games.

It recently completed the Tottenham Hotspur Stadium in north London, which features a retractable pitch, and is working on  a spherical arena in the same city.