A central courtyard brings daylight into an inward-facing, cedar-clad home in Salt Lake City that was designed by American architects Kipp Edick and Joe Sadoski for a ski coach.

The Host House sits within a residential neighbourhood in Utah's capital, along the western front of the Wasatch Mountains.

The client was the late Alan Hayes, a computer engineer who helped establish the local Rowmark Ski Academy. Hayes passed away in 2019, but the project continued and was completed last year. The home was sold in August to a new owner.

For decades, Hayes provided mentorship for young skiers, many of whom he hosted at his home. His protégés included alpine ski racer and Olympic medalist Tommy Moe and road-racing cyclist Levi Leipheimer.

To design his new residence, Hayes had contacted two architects whom he had mentored years ago – Edick, cofounder of Architect Associates in New York, and Sadoski, a project manager at Signal Architecture + Research in Seattle. They aimed to "create a spatial expression to help and encourage room for students to grow".

"Creating space to host kids was a central concern in the design of this home," the architects said.

Facades that are visible from the street are mostly opaque, thus concealing the home's size and interior activities. The entrance facade, which looks west, features a solid black door and no windows.

"The client was a very private individual who supported a design approach that located the glazing in specific zones of the house to provide ample daylight and privacy," the architects said.

Exterior walls are wrapped in rough-sawn, western red cedar that has been attached with a rainscreen system. The same siding clads the garage door on the south elevation. When closed, the door seems to vanish and merge with the surrounding walls.

In contrast to the closed-off exterior, the interior appears to be fluid and open.

The ground level holds the public areas and a master suite, while the upper floor encompasses two bedrooms and a lounge. A small basement contains a wine cellar, food storage and a utility room.

Upon entering the home, one steps into a 110-foot-long (34-metre) corridor that runs along the north side of the plan. 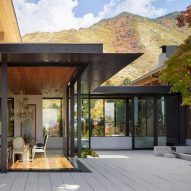 "All ground-level spaces and the stairs extend off of the corridor for a clear circulation diagram," the architect said.

At the heart of the main floor is a landscaped courtyard, which is encircled by glazed walls that usher in natural light. Beyond the courtyard is an open area for cooking, dining and lounging.

"The homeowner valued observing a set dinner time, so the dining room became a central space," the team said.

The second level is accessed via a stairwell illuminated by a skylight. The upper floor is meant to act "as a separate wing of the home, where guests can experience privacy while still being connected to the public spaces of the house".

Designed to be a net-zero building, the residence has a range of sustainable features. Among the passive strategies are a high-performance building envelope and triple- and quadruple-pane windows.

The residence also has a 3,000-gallon (11,356-litre) cistern that stores rainwater for irrigation purposes.

"The homeowner was very open to innovative efficiency ideas," the architects said, "and willing to invest in solutions that would pay off over time."

Known for its rugged mountains and scenic vistas, Utah is home to a number of distinctive, modern-style buildings. Other projects there include a sprawling residence by Olson Kundig that consist of three pavilions connected by covered walkways, and a series of cedar-clad chalets by MacKay-Lyons Sweetapple that form a mountaintop retreat.