Architect Gerhard Heusch has completed a subterranean extension for his own 15-year-old home that sits atop pilotis over a hillside in California.

The home office space is an addition to the architect's Oak Pass Residence in Beverly Hills, which was originally completed in 2006.

"I now have the most serene office commute that I could have ever imagined," said Heusch, who was born in Germany and started his eponymous LA studio in 1991.

Heusch's main dwelling is a single-storey bar, elevated above a sloped site by a series of thick, steel columns.

Below the house is a paved parking area and garden, along with a slender lap pool. The residence is surrounded by grasses and oak trees.

When Heusch purchased the property two decades ago, his aim was to create a house that respected and embraced its natural context.

Several years ago, he decided to add an office to the residence. Following in line with his overall vision, Heusch wanted an addition that did not disrupt "the architectural balance between the fully-built house and the natural beauty of the land".

He opted to place the office below the paved area and garden – an undertaking that began with the excavation of 80 truckloads of dirt.

The pool remained intact, and the main support columns holding up the house were largely left undisturbed. The foundation of one column was integrated into the new space. 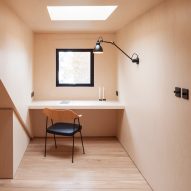 To form the 1,500-square-foot (139 square metres) addition, Heusch and his team used concrete for the walls, floor slab and ceiling. Special measures were taken to incorporating electric wiring and lighting into the concrete structure.

Several windows are incorporated into the space, including two glazed skylights. Visible in the garden above, the skylights can be walked upon.

A staircase leads from the garden down to the basement. Squarish in plan, the building encompasses an open work and lounge area, along with a bathroom.

Exposed concrete walls and flooring give the space a cool, crisp feel. Furnishings include a desk designed by Heusch and a plush couch from B&B Italia. The desk lamp was created by Michele de Lucchi for Artemide.

Above the subterranean addition, Heusch re-introduced the pavers and sand that were in place beforehand. He also added small boulders that were found during the excavation.

"There is a definite professional advantage to living within the built environment that I have created," said Heusch.

"The success of the project, and the natural beauty of my surroundings, inspire new ideas every day for advancing the integration of architectural design into the natural environment."

Beyond his studio in LA, Heusch has offices in Paris, Buenos Aires and Hồ Chí Minh City.

Other California projects by his firm include the overhaul of the mid-century Edwin Residence, which is located high up in the Santa Monica Mountains.