O-office Architects has converted several buildings on a tea plantation near Guangzhou, China, into a cultural centre featuring a rooftop garden wrapped in bamboo screens.

As part of the (Re)forming Duichuan Tea Yards project, local firm O-office Architects was tasked with revitalising three disused buildings at the plantation in the Gaoming District of Guangdong Province.

The site in Duichuan Village was established as a tea plantation in the 1950s and comprises more than 300 acres of gently rolling hills dotted with small lakes.

O-office Architects was approached to help transform three factory buildings into an exhibition space in 2017, after the tea yard had been abandoned and fallen into disrepair when the demand for its tea declined at the start of the 21st century.

The exhibition space is located at the heart of the reestablished production facility, which will soon begin harvesting its first new crop of Duichuan tea.

The three 1980s edifices are situated on a small island in an artificial reservoir that also contains woodland, with low-rise former workers' housing nestled amongst the trees.

Exposed concrete structures and narrow-framed steel windows were retained to evoke the buildings' industrial heritage. The architects also sought to enhance the connection between the former production spaces and the surrounding plantation.

"We tried to find a simple spatial prototype for the reconstruction of the site to load the envisioned cultural settlement," said the architects in a project statement.

"The design gradually approached a concept of the mixture of 'pavilion' and 'podium'," the studio added. "We tried to evolve the prototype of the 'pavilion' into a settlement that encompasses production and detour."

To house the main cultural and public spaces dedicated to the history of tea production, a new podium made from blocks of dark local granite was constructed around the base of the existing buildings.

This structure functions as a viewing platform and contains openings that redefine the relationship between indoor and outdoor spaces, lending the facility a more porous and welcoming character.

New roof gardens on top of the three factory buildings are connected by bridges so visitors can traverse the site whilst taking in aerial views of the plantation.

The garden courtyards are lined with bamboo screens that also extend onto staircases at the corners of the buildings. The stairs connect the rooftop with the stone viewing platform, creating a route that leads visitors all the way around and over the site.

"This connection creates a vertical yet horizontal promenade that wraps around the original production space," the architects pointed out.

"We hope this tour can evoke a sense of 'in search of a lost time' [whilst] at the same time acting as a response against the rapid industrialisation of modern urban and rural areas." 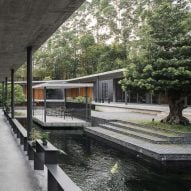 The blending of the industrial buildings with the plantation is enhanced by landscaping that includes several ponds and trees that reach through apertures in the stone podium.

O-office Architects was established by He Jianxiang and Jiang Ying in Guangzhou in 2007. The firm works on projects across various scales, from urban design and architecture to the exhibition and furniture design.

Several of O-office Architects' projects focus on renovation and conserving the architectural history of the Pearl River Delta. It previously worked on a residence inspired by vernacular courtyard houses found in the region.

Photography is by Zhang Chao unless stated.