This contemporary reinterpretation of a vernacular courtyard house in the Chinese city of Guangzhou features a sequence of living areas and bedrooms arranged around a central pond.

Local studio O-office Architects designed the three-bedroom Veranda Courthouse for a site on a gently sloping south-facing hillside in a northern suburb of Guangzhou.

In response to the local climate and architectural heritage, the architects based the design on the traditional Lingnan courtyard house – a regional vernacular that utilises green brick and follows the spatial principles of Feng Shui.

The building follows the topography of the land as it drops down gradually from north to south, and seeks to reinterpret the courtyard house's relationship between internal and external spaces.

"The symmetrical composition of a traditional courthouse has been re-assembled as a collection of living spaces, connected by a veranda loop," the architects explained.

The main courtyard at the centre of the building is paved with brick and features several stepped levels that descend to connect the main living spaces on the ground floor with a basement containing a multimedia room, storage and an activity space.

Concrete pathways extend across a pond to create a meandering route through the building. The paths lead inwards toward a shaded pavilion positioned alongside a tree that creates a sense of connection with the surrounding woodland.

"Meanwhile, the traditional axial order has also been reorganised to create experiences of free wandering and views between the landscape and living spaces," said the practice. 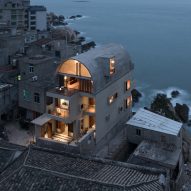 The house utilises the same style of grey brick as the Lingnan buildings, but replaces the archetypal wooden roof and structural columns with modern steel and reinforced concrete.

Cylindrical columns are spaced out around the perimeter of the central courtyard to support the concrete slabs of the roof and the ground floor where it extends above a sunken courtyard.

The concrete planes project beyond the inner facades to form a sheltered veranda on both levels. The internal living spaces are enclosed on three sides by grey masonry, while the other sides face the landscaped garden.

The surfaces lining the courtyard consist of a prefabricated metal framework containing openings that reference the pivoting screen doors found in the region's historic homes.

The openings incorporate surfaces made from two different materials that provide a level of privacy appropriate to the function of the spaces inside.

Public spaces including the kitchen, dining room and living area are lined with glass doors that ensure a constant visual connection between the interior and the courtyard.

Private areas including the bedrooms positioned along the western edge of the courtyard are concealed behind wooden screens that can also be opened up when required.

Photography is by Chaos Z.