The two small cabins, which are used as holiday homes, were designed to blend in with the coastal landscape in which they are set.

At the same time, they stand out, lookout tower-like, since they were built with vertically-stacked rooms in order to optimise the built area on the steep slope.

Croxatto and Opazo Architects adapted the plans to make the most of the surrounding vistas and to protect the interiors from the weather.

Large windows overlook the ocean, 80 metres below the cabins, as well as the Lobera – a large rock jutting out of the sea that is home to sea lions and other animals.

"The shape responds to the views towards the different places we wanted to show from the inside and how to relate the buildings to the environment," co-founder Felipe Croxatto told Dezeen.

"Both cabins were built as small cubes, with their faces opened to seek the views and protect them from the strong wind."

The Santiago-based studio constructed the cabins on platforms supported by a hidden structure made from pressure-impregnated wood.

The exterior of the cabins has been clad in timber that was manufactured from reclaimed oak sleepers and treated with petroleum oils to provide a barrier against marine corrosion.

"Matanzas is a wood production area, so it is a very easy material to get, at an affordable price," Croxatto explained. "Wood is a good material to use in coastal climates."

Inside, the cabins have been lined with recycled wood which acts as thermal insulation. "In the interior, we used pine wood treated with Osmo Coating for sun and dust protection," Croxatto said.

The dining rooms, bathrooms and kitchens in both cabins are located on the ground floor and feature furniture in the same wood as the interior to help maximise the space.

Large windows in the social spaces reinforce the feel of being in a lookout tower and open the cabins up to the ocean views.

The bedrooms (one in La Loica and two in La Tagua) are located on the upper level and accessed by ladders.

"The bedroom is connected with the rest of the space through the double-height living room, a disposition that seeks to frame and direct the view, pointing towards the wooded hills to the south, and the rocky Lobera to the north," Croxatto and Opazo Architects said.

Both cabins are connected to the electric grid, but outdoor lights are powered by solar energy. Water is delivered by a water truck. 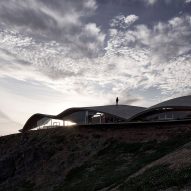 La Loica and La Tagua were designed for two different clients, each with different requirements.

"What they liked the most about the cabins was the way the buildings are related to the landscape, and the experience the buildings bring to the inhabitants in relation with nature," Croxatto said.

Croxatto and Opazo Architects was founded in 2010 by Croxatto and Nicolás Opazo Marchetti and is based in Santiago, Chile.

Chile is home to a number of interesting cabin designs, including Guillermo Acuña Arquitectos Asociados small La Invernada cabin that glows at night and the self-sufficient ZeroCabin, which was designed to operate off the grid.