In partnership with The World Around, Dezeen broadcast a programme of live talks featuring Ryue Nishizawa, Liam Young, Alice Rawsthorn and more. You can watch the first part above.

The first instalment of the day-long summit, which was streamed on Dezeen in three parts, featured a diverse range of practitioners who each use storytelling to decipher current global crises.

"Through their extraordinary and varied practices, this group of leaders and visionaries show that creating tales and fabulations is not a playful distraction, but a fundamental design tool," she said.

The summit marked the launch of The World Around's year-long residency at the Guggenheim museum. 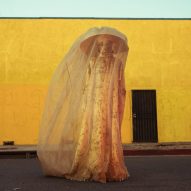 The day of talks kicked off with a brief introduction by Galilee and Guggenheim museum's director Richard Armstrong. Deputy director Cyra Levenson also joined them.

The first presentation of the day was given by design critic Alice Rawsthorn, who discussed Design Emergency, a research collaboration with curator Paola Antonelli. Design Emergency explores design's role in creating a better future and its response to the coronavirus pandemic.

Feral Atlas' co-founders Anna Tsing and Feifei Zhou presented a film about their interactive online resource, which aims to playfully explore the impact that the last 100 years of human activity have had on the planet.

Speculative architect Liam Young discussed his latest short film, which he made in collaboration with National Gallery Victoria in Melbourne. Called Planet City, the film imagines a city that houses 10 billion people.

Ya No Estoy Aquí (I'm No Longer Here) is an award-winning film by Mexican director Fernando Frías.

The film, which won 10 Ariel awards and is Mexico's selection for the Oscars, follows a group of teenagers from Monterrey who create a countercultural movement around traditional cumbia music.

The exhibition, which is slated to show at the Swiss Institute in New York, examines the limitations of learning within typical school settings.

Pritzker-prize winning architect Ryue Nishizawa concluded the presentations by talking about his latest project – a single-family home on the coast of Chile.

The films were followed by a live panel discussion, called Town Hall Q&A, which was moderated by Levenson and featured Rawsthorn, Tsing, Zhou, Haas and Young.