Catalan architecture office Aixopluc replaced several improvised sheds and porches surrounding an old house in the city of Reus with an extension that utilises a similar palette of low-cost, lightweight building materials.

The 1,000-square-metre plot in Aixopluc's home city of Reus was owned by the client's father, who prior to his death had spent decades adding various ad-hoc structures to a traditional two-storey farmhouse.

The project takes its name, MAS JEC, from the word "mas" – used to describe this type of farmhouse in Catalonia – and an acronym of the names of the family which now lives there.

Aixopluc was tasked with reorganising the site to create a range of accommodation, including renovating the mas building and creating a more formal extension containing living spaces for the family of three.

Since the mas was built, the site had been subsumed into the city's urban sprawl. It is now enclosed on the northern and northwestern sides by apartment blocks that shelter it from the summer sun and strong mistral winds.

The site's distribution of light and shade informed the design proposal, along with the clients' request for a single-storey dwelling that would be more comfortable and accessible as they grow older.

The first decision to be made was whether to demolish and replace the existing house, which was unsuited to the clients' needs. For sentimental reasons, the mas was kept intact and a new structure was proposed that maintains the character of the fondly remembered outbuildings.

"The value of this place was not the existing main house," claimed Aixopluc. "Although its structure was in quite good shape, what made it inhabitable were its self-built garden structures." 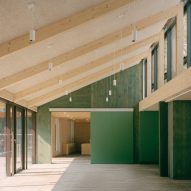 "We needed to find a way to upcycle these structures and add some more inhabitable air among them."

The extension occupies the shaded area to the northwest of the main house. The sheltered location creates a microclimate that prompted the architects to propose a lightweight construction that opens up to receive the best of the westerly light.

The main structure is made from cross-laminated timber panels that were prepared off site and erected in just two weeks.

The building is topped with a corrugated metal roof supported by slender steel poles, giving it the appearance of a porch or one of the sheds built by the owner's father.

The bedrooms are located on the northeast side to catch the low morning sun in winter, and are covered in thick cork panels to insulate them at night.

The kitchen on the building's western side receives afternoon sun in winter. The timber panels are left exposed here as their thermal mass ensures a comfortable internal temperature.

Inside the house, wood is used for almost every surface, including the floors, ceilings and fitted cabinetry. Bench seating and even the dining table are made from the same laminated wooden boards.

Openings between the different areas, as well as some of the windows to the outside, feature rounded corners that are echoed in the handles of the cupboards and sliding doors.

Renovations undertaken inside the mas included removing many of the internal partitions and part of the first floor to create an open, multifunctional space.

"We erased any trace of programme or specific use inside the mas," said the architects, explaining that the house could be occupied by the clients' daughter in the future.

"Kitchen, gone. Bathrooms, gone. Rooms, gone. First floor, half gone," they added. "A space devoid of any programmatic constraint, just an interior. Not useless, but with no particular predetermined use. What were once small, dark rooms are turned, as if through some magic trick, into a tall, light tower."

A wood-burning stove was placed in the central double-height hall and small openings were added to improve ventilation. Externally, the mas was painted in a colour the client remembered from the first time he visited the site.

Aixopluc was founded by architect David Tapias and describes itself as "a team of architects committed to making the earth more inhabitable".

The architects work remotely but have an office in Reus, above which they created an experimental one-room apartment to showcase a modular furnishing system they developed.

The studio also collaborated with Brooklyn-based Fake Industries Architectural Agonism on the design of a holiday home in nearby Alforja, which features an entirely openable ground floor.