German designer Emilie Burfeind has developed a sock sneaker with a mushroom mycelium sole and a knitted upper made from canine hair that was shed while grooming and would otherwise have been discarded.

The Sneature trainer consists of only three bio-based, renewable materials, allowing it to be either taken apart and recycled or industrially composted at the end of its life.

In comparison, traditional trainers are generally made from around eight to 12 different components such as nylon fabric and ethylene-vinyl acetate (EVA) foam – many of which are petroleum-based and would survive in landfills for up to 1,000 years.

"Because of their complicated structure and the different materials they are made of, it's almost impossible to disassemble and recycle conventional sneakers," Burfeind told Dezeen.

"So I wanted to design a sneaker that is made of as few components as possible and remains biodegradable after use."

The trainer has no laces and largely consists of one seamless sock, made from dog hair that was crowdsourced from dog owners by Berlin start-up Modus Intarsia.

This hair is spun into a high-quality yarn known as Chiengora, which is 42 per cent better at retaining heat than sheep's wool and was historically used by indigenous societies on America's West Coast.

"In Germany alone, 80 tonnes of this raw material are discarded every year," said the designer.

"Compared to animals that are bred and kept solely for fibre production, the domesticated keeping of dogs is no additional burden on the environment but a resource that exists anyway."

To create the upper Burfeind relies on 3D knitting technology, which is essentially like 3D printing with yarn. But instead of melting plastic filament to create a solid shape, the final design is bonded through wefts and warps.

This process allows a digital, three-dimensional pattern to be realised in one "print", without seams or waste. And crucially, it also means the final design can take on different performance qualities without the need to bring in different materials.

"Using 3D knitting technology enables me to create an extremely diversified design via the programming of each individual stitch," said Burfeind.

"The knit can be manipulated so that it is softer or firmer in some areas, more breathable or more elastic in others."

The resulting sock is then dipped into liquid natural rubber derived from the sap of the hevea brasiliensis tree, to create a water-repellant mudguard along the sole. 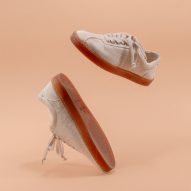 Mycelium, the filament structure that fungi use to grow, is mixed with a cellulose substrate made of hemp and other agricultural waste products and grown in a mould to create the outer and inner sole.

These interlock like lego bricks, with perforations on the underside of the knit helping to hold them together and stabilise the shoe.

As the Sneature was created as part of Burfeind's studies at the Offenbach University of Art and Design, from which she graduated last year, there is no long-term data about its durability at this point. But the designer estimates that they could be used for around two years before they become too worn down.

After this time, the mycelium composite can be shredded, pulverised and reused while the fabric can be separated into individual fibres in a process known as carding, before once again being spun into a yarn.

Alternatively, the materials can be broken down in an industrial composter in around four weeks so that their nutrients are reintroduced into the ecological material cycle.

Making use of 3D knitting technology allows the design to be manufactured on demand, preventing overproduction while allowing users to customise the size, colours, patterns and materials of the shoe.

According to Burfeind, the process also works much faster and with smaller production facilities and less energy than a conventional trainer.

"Since Sneature is made of biological waste materials, no energy is needed for their production, only for their further processing," said Burfeind. "And the energy needed for processing and production processes like spinning or knitting is low compared to the extraction of petroleum-based raw materials."

A number of big brands have made attempts at mitigating the environmental impact of their trainers in recent years, with Adidas creating an endlessly recyclable design and one made from ocean plastic.

Nike's experimental Space Hippie sneakers are made from 90 per cent recycled content, including from the brand's own factory waste, while younger companies such as Allbirds and Native Shoes have instead focused on using natural materials such as pineapple husk and castor beans.