Studio Marco Vermeulen has unveiled its design for The Dutch Mountains, two connected hybrid skyscrapers made from cross-laminated timber and concrete in Eindhoven, the Netherlands.

The Dutch Mountains building will comprise two rectangular towers, 130 and 100 metres tall, and was designed for a central location in Eindhoven in the city's railway zone next to the Dommel river.

The proposed design was formed by connecting the facades of the towers with one another to form a valley-style roof over a central interior lounge that will span across the lower levels.

Its height means the 38-storey building will be visible from across the city.

"The building has a sculptural main shape that is recognisable from a great distance and functions as a beacon," the Rotterdam-based studio said.

The multifunctional complex will include housing, offices, leisure facilities and a hotel, centred around a winter garden on the lower floors.

Cross-laminated timber (CLT) sourced from sustainably managed forests will be used for much of the building, which will be largely prefabricated and assembled on site.

The publicly-accessible interior lounge and winter garden on the lower levels will be wholly constructed using timber, while heavy loaded structural elements, including lift cores and tower floors, will be made from concrete. 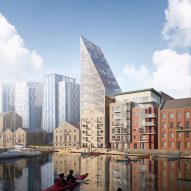 "Although not visible in every place, the wood gives a tactile quality to the interior," Studio Marco Vermeulen said.

A lattice facade will wrap the exterior of The Dutch Mountains and be visible from inside, adding a tactile quality to the design.

"The elegant lines of the facade merge into that of the 'voile', a roof construction of laminated wooden beams that gives the building finesse and character," the studio explained.

The main entrance into the building will be orientated at the foot of the local park, the Dommelpark, and connect the wooden atrium with the outdoors.

In the ground-floor winter garden, a wide staircase fitted with planters and seating will lead to the first-floor restaurants and terraces facing the undulating atrium and the Dommelpark.

The studio hopes visitors will be encouraged to take this scenic route, which it calls the "mountain path," to the upper floors rather than using the elevators.

Studio Marco Vermeulen incorporated an irrigation system that collects rainwater from the roof and directs it to the interior planting in the "valley" of the building, with any excess water redirected to the Dommel river.

"Natural principles are used as much as possible to control the indoor climate of The Dutch Mountains," the studio said.

The 130-metre north-east tower will contain homes, while the smaller south-westerly tower will accommodate the hotel and short stay apartments to be topped by a rooftop bar with 360 views across the city.

Solar panels will be fitted to the south and westerly facades.

Other tall CLT buildings include Urban Agency's design for Dock Mill, which could become one of Europe's tallest timber building, and Architectur3's triangular tower for a Black Forest church.