Plans for the pyramidal Centre for Music by Diller Scofidio & Renfro in London have been scrapped, with a "major renewal" of the nearby Barbican estate set to take place instead.

The concert hall designed by US studio Diller Scofidio & Renfro with British firm Sheppard Robson was planned as the new home for the London Symphony Orchestra.

However, the City of London Corporation has now axed plans in favour of a revamp of the adjacent Barbican estate as part of the capital's Covid-19 recovery plan.

The Centre for Music was first revealed in 2017 when Diller Scofidio + Renfro was selected as the winner of an international competition for its design.

The studio had planned a twisted, 14-storey tower, which was selected ahead of proposals by the likes of Amanda Levete, Norman Foster and Frank Gehry.

It was expected to replace the Powell & Moya-designed Museum of London on the southern edge of the Barbican, which is being relocated to a building by Stanton Williams and Asif Khan at Smithfield market.

However, with a cost of £288 million and a pledge of just £6.8 million from the City of London Corporation, it was heavily reliant on private funding.

The council has said it could not be progressed due to "current unprecedented circumstances".

The City of London Corporation will now use its funds to upgrade the Barbican complex – one of the largest examples of post-war brutalist architecture in the UK. The building was designed by Chamberlin, Powell and Bon in the 1950s and opened in 1982.

Work is slated to begin in 2022, with the goal of it playing a key role in the recovery of London and its cultural sector following the coronavirus pandemic. 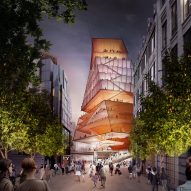 "New times need new solutions," explained the Barbican's managing director, Nicholas Kenyon. "As we reimagine the City in a time of recovery, we are delighted that a major project to renew the Barbican will be launched in 2022, its 40th anniversary."

Updates will include improving the estate's sustainability credentials, providing new civic spaces and enhancing its digital offerings. The now-vacant site of the Museum of London will also be redesigned.

The City of London Corporation says the overhaul will be carried out in phases and is hoped to meet the needs of modern visitors, performers, and artists.

It will be developed in collaboration with "world-class" architects, enlisted through an international design competition launching later this year.

"The decision to renew the Barbican Centre, the globally iconic arts venue, shows the importance to arts and culture to the future of the City of London," the chair of Barbican Centre, Tom Sleigh, told Dezeen.

"Our intention is to seek world-class advice on how to upgrade the buildings to make them fit for the next 40 years, whilst respecting the intent of the original architects." 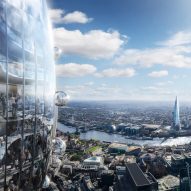 The cancellation of the Centre for Music follows the axe of The Tulip – a 305.3-metre-high viewing platform designed by Foster + Partners for central London.

However, New London Architecture chairman Peter Murray argues that tourist attractions like these are needed to help the City of London recover from the coronavirus pandemic.