Studio Viktor Sørless and Estudio Juiñi have designed the Xinatli museum to tower over an area of jungle in Mexico that is being reforested after years of illegal logging.

Norwegian firm Studio Viktor Sørless and Mexican office Estudio Juiñi plan to build the museum out of wood and earth in a project led by Mexican art collector Fernanda Raíz.

Its design is informed by ancient step pyramids, with angled volumes in different sizes staggered up a vertical core.

The museum, which will be dedicated to research in the arts and sciences, will stand guard over a 90-hectare clearing that is going to be replanted with trees.

Located in a tropical rainforest in southern Mexico, the area's ecology and community have been badly affected by the illegal timber trade.

Xinatli will be built from clay and rammed-earth with wood used for the load-bearing elements. Clay will be bound with Chukum resin and sisal fibre to make it strong and weather resistant.

Studio Viktor Sørless and Estudio Juiñi both specialise in using clay in construction and are keen to see it return as a less environmentally damaging alternative to concrete.

"It saves expensive building technology and is rooted within the ancient traditions of nearly all cultures that have been displaced by modern industrial construction methods," explained Sørless, who founded Studio Viktor Sørless in 2018.

The building method used for Xinatli owes a great deal to the indigenous construction techniques of the Yucatecan Maya, who plant trees as support structures rather than digging posts into the ground for their traditional dwellings called xa'anil naj.

"Our studio learned a lot during the design process with local artisans," Sørless told Dezeen. "First of all, how wrong we have built until now," he continued.

"We have been using this building material ever since humans starting settling; it's there at our feet, in the ground, as humans, in essence as a kind of cement for a more humane way of building." 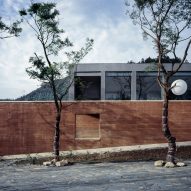 The clay-and-wood building won't last as long as concrete, but according to the architects, that is the point.

"The building is a fusion of indigenous architecture and engineering expertise," said Sørless.

"The plan is not to create a building that will last forever. It needs to be looked after, otherwise, it will degrade. This element of transience acknowledges that life is a process of growing, perishing and becoming – and that we humans can make a conscious decision about how we treat our environment."

The contemporary reimagining of the stepped pyramid, a design taken from Mesoamerican history, is intended to be symbolic.

By moving the widest layer of the pyramid from the base to the middle of the structure, the widest part will be level with the crowns of the new trees.

This, said Sørless, symbolises the overturning of pyramid-shaped class systems in societies where a wealthy minority oppresses a poor majority. 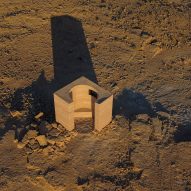 The museum's founder aims to rethink the traditional museum model and use Xiantli as a platform to advocate "for the restitution of art and cultural goods originating from colonial contexts".

"Until now, museums have usually been a space where power is put on display," said Raíz.

"A 21st-century museum should not be a showcase for power but instead a place that advocates for greater equity: in ecology, in art and in society."

The project will is scheduled to be completed in 2025.

More architecture in Mexico informed by step pyramids includes this performing arts venue on an archaeological site and a bunker-style house.